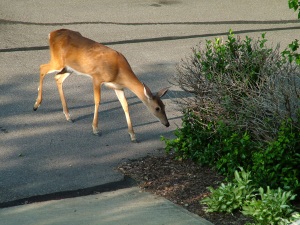 It was a pretty nice morning this day. I had a reasonably good night's sleep (too brief, as usual, but restful except for waking briefly suspecting the shadow on the wall had supernatural significance, telling my id it was stupid, then going back to sleep). As I was getting dressed for work, clad in briefs and a dress shirt, I spotted a deer munching on tree ring plants in a neighbor's front yard. So I went downstairs, grabbed my camera, and shot a few photos of our visitor. The deer strolled out of the neighbor's yard and toward ours so I moved to the balcony, still clad in briefs and a dress shirt. Hey, I was covered! Anyway, the deer was becoming wary apparently hearing my camera's stupid beeps and clicks but was checking out some ragged landscape plants when I shot the photo shown here. Shortly after that, our Friday morning visitor disappeared into a small wooded area nearby and I went indoors to put my pants on. The deer around here regularly visit our front yards in search of good grazing but we usually don't see them this long after sunrise. They are emboldened by the pressure of diminishing habitat as wooded areas and open fields are developed, mostly for new housing. I can't help but feel sorry for them: they're just trying to make a living in a world that is increasingly hostile. I wish we would preserve more green areas around here as refuge and habitat for these and other wild creatures. Politicians and developers define such lands as "vacant" or "idle." Just shows you what they don't know about the natural world and it's too bad so few people recognize the value of such areas.

The cats are both doing well. You can tell Tasha's feeling better because she was a total grouch towards Missy last night. She's probably transferring the aggression she has over the outdoor cats she sees through the window on to poor old Miss who she sees moving through the nighttime shadows of the living room. At any rate, she charged and hissed at Missy several times last night and was difficult to calm. This morning they were apparently at peace with each other as they got their respective medicines, foods, and treats.

My niece is to be married tomorrow. Most of the family will be traveling to the Dayton area for the ceremonies but we won't be among them. I'd made an early prior commitment to run an open house at the College Observatory for Alumni Day. Pretty important to not miss. By chance we also got into the conflicting requirement for regular medication of two cats who definitely will do better at home than boarded at the vet's. Long-term stress is just no good for them. Still, I'm sorry to miss this important day in her life and the chance to see my family. So, weakly in our stead, we sent our best wishes and a generous gift to dear Rachel. Even now I usually think of her as a 10-year-old girl rather than the engaged recent college graduate she now is. {Sigh!} Where did those years go?

2 comments on “Friday morning with visitor”