Couch comes up, server goes down

I took a vacation day today so that I could be home to receive the new couch from La-Z-Boy. I like the fabric color better than I thought I would; it's "mossier" than the photo makes it look (maybe a bit too "lime" here). And it is comfortable which is what we were really after. A recliner seat at each end with a fixed seat in the middle. Now we have to find a new home for the old couch which is in great shape but we don't want it. The Federation of the Blind told us they don't pick up furniture (couches, anyway). Salvation Army told us they could pick it up next month, why don't we call Federation of the Blind? {sigh} So we're asking relatives if they're interested. The living room is pretty crowded right now. 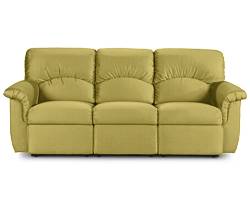 No sooner did the couch get put in place than I received an email telling me the main WWW site at work was unresponsive. I quickly determined the network was fine and the server machine was running, but one of the sites it serves up was comatose. Since this hadn't happened before I felt it necessary to run to the office and lay my hands on the poor thing. That Web Site instance had stopped. Restarting it didn't help. The only thing that seemed to work was restarting the entire server. Hoping it isn't another security breach!

So, the sever crisis resolved, I left for a local mall to get lunch and a haircut. Both were pleasing though the tofu at the Thai fast food place tasted fishy — I hope they don't use fish sauce! The haircut was good; the stylist had no other customers and so was unhurried and talkative. She didn't use fish sauce. The haircut came out pretty well but I've never been all that happy with it, mostly because I don't like to fuss with styling my hair.

I'm still feeling like I'm not 100 percent recovered from my cold but I definitely feel better this afternoon than I did this morning. I should be in much better shape tomorrow.