A beautiful Sunday in the marshlands

She Who Must be Obeyed surprised me this morning. I was sure she was dead set on going for a bicycle ride in the unusual hot and humid October weather. She just bought new cycling shoes and had been itching to get out on the road. I had already decided not to object and that I would enjoy the two-wheeled outing. But no! She began waffling. Whilst She did want to get out on this sunny day, perhaps a hike would do … but not in some area we always go to. Pulling out her handy-dandy ring binder containing trail maps and brochures she said, "how about Mentor Marsh?" Sounded intriguing to me so off we went, cameras and all. The first part was a little disappointing: it was a flat wooded area whose understory was littered with fallen trees and limbs and no sign of new plant life. Hmmmm… We trekked back to the nature center at the trail head –it was closed when we arrived– to find the door open and someone inside. After a friendly encounter with the nature center staffer who was enjoying her lunch before the "official" hours began, we set out exploring (after lunch on our own). The staffer said we would find an area where we would cross into the marshland via boardwalk. So we began walking the two-mile trail that we thought might do the crossing. Noope! We did have a long lovely hike there, however, over undulating terrain in a sometimes deep woods. The trail, however, never crossed into the marsh though it came to its edge several times. Many birds flitted amongst the trees and scrub. Some mosquitoes buzzed about but not as many as one might expect. Fallen trees in various stages of disintegration provided food for fungi of all sorts. We shot lots of photos, many not very good due to difficult lighting conditions. We saw four deer, too, or possibly the same pair twice. 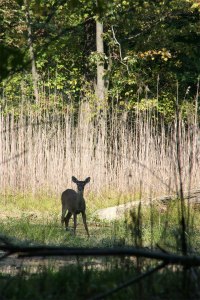 On the return walk (an out-and-back trail) I got the accompanying picture which was exactly the image I wanted. The deer, in semi-silhouette, is in tack-sharp focus. Very pleased indeed. Got back to the car, looked at the Marsh brochure and, oh!, it's another trail that goes out into the marsh! A few minutes' drive, resolved confusion about where to park and where the trail head was (thanks to some neighborhood kids), and we were on the boardwalk. The most impressive thing there? The height of the marsh reeds! The photo with this post illustrates just how dense and tall those plants really are. Quite incredible. So, after a very good set of hikes, two very sweaty people headed home for showers and baked spaghetti. A beautiful Sunday in the marshlands.

One comment on “A beautiful Sunday in the marshlands”