Comet pix a work in progress 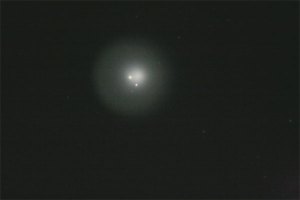 They're my first telescopic comet photos. Here's one that has been heavily "Photoshopped" but it basically shows what I saw… Comet 17P/Holmes moving with two or three background stars showing through its coma. At first the two bright stars were right in the middle of the cloud looking like they might be part of the comet. Alas, as I observed over two hours the bright specks appeared to move off center and away from where the nucleus lay. More later… it's late and I'm tired and I must go to work Monday morning!

2 comments on “Comet pix a work in progress”