Buzzards and blooms on a very good morning

We are enjoying a string of very beautiful spring days. Since I'll go to the office late today, what better way to spend the morning than taking a photo hike along the shores of wooded Hinckley Lake. I imagined fog rising from the surface of the water, backlit by the low sun. I hoped for deeply blue skies. And I hoped I'd see buzzards basking in the first warmth of the day, as I'd seen once before. I got most of what I wanted and I am a happy fellow indeed. I also shot my first digital photos in RAW format, which I will play with later.

Spring Morning at Hinckley Lake
Walking along the gravel path was a pleasure. I spotted a downy woodpecker up in a tree but couldn't get a clear view for photos. Meanwhile a male cardinal perched above me and gave me a stern look; I was wearing a red jacket and he probably thought I was a rather gigantic intruder! Rounding a curve I sighted them: perched all over the top of a dead tree were turkey vultures, "buzzards," basking in the morning sun to relieve the nighttime chill.


The big birds watched me cautiously and some folded their wings preparing to make an escape, if necessary, as I approached and stood beneath their perch. Leaning against the trunk of a neighboring tree, I watched as some of the buzzards took short flights from branch to branch, and others to a nearby tree. As time passed the birds became more and more active, ruffling their feathers and moving around.


One by one, over the ensuing quarter hour or so, the birds took flight and began soaring individually and in groups. They circled, sometimes alighting again on their tree. Once or twice birds landed on branches that could not support their weight and the twigs, without birds, came crashing to the ground. Soon all but one of the birds were in the air and moving off over the surrounding countryside. Vultures are magnificent fliers.


Just in case large carrion-eating birds aren't your aesthetical cup of tea, here's one last shot for you –taken from among the many bunches of spring flowers blooming around the entrance to the park and boat house– a backlit daffodil. 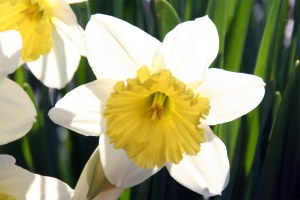 
It was a very good morning and I'm feeling better today than I have in quite some time! Unfortunately, I now must leave for work.

4 comments on “Buzzards and blooms on a very good morning”