A good visit to an old observatory

The day of presentations seemed to go on forever at the Antique Telescope Society's workshop. There was really good content but way too many hours of it. So I got up and walked out of the classroom –the former meridian transit room of the observatory– or shifted in my seat. Often. At times rain poured down in sheets as we heard discussions of the viability and survivability of "Vintage Observatories" in the 21st century. Don't get me wrong… the presentations were both interesting and informative. My bottom still got sore from all the sitting, though. Fortunately the sky began to clear off in the late morning hours and many of us enjoyed strolling around the grounds of the Cincinnati Observatory Center. I shot many photos both indoors and outdoors showing various views of the main observatory building and the smaller Mitchel Building on Mt. Lookout.  After dinner I listened impatiently to presenters but was really anticipating sunset and a chance to look through the grand 16-inch Alvan Clark & Sons telescope, showpiece of the Center. 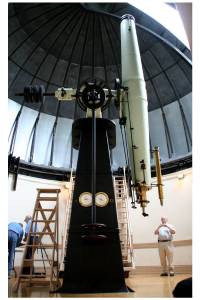 From inside the classroom I heard a rumble. Someone said that was the sound of the dome being rotated. So I ran up the stairs and into the dome room and got to see the huge dome rotate above me. The presenting astronomer for the evening offered me the honor of opening the shutter for the night's observing. He said to be careful to stand directly under the rope-operated pulley so as not to derail the rope and cause it to fall off. I got the shutter opened but managed to drop the rope! {Sigh.} Fortunately it was easy to fix: rotate the dome so that the aperture was over the observer's chair, climb up, loop the rope over the pulley — fixed!

The astronomer also let me turn the crank to wind the drive weights into position. Or was that something like Tom Sawyer "letting" his friends paint the fence? No matter, I grabbed hold with both hands and turned the crank lifting 300 pounds of cold iron. Conversing with the observatory staff and just hanging around in the dome was a fine time for me, far from the yammering crowd below!

As luck would have it –this always seems to happen– clouds began to roll in at about the time it got dark enough to spot Saturn. We all got at least one glimpse of the ringed world before solid overcast moved in and shut us down. I was allowed, and requested, to run the R.A. slow-motion control to center up Saturn before clouds could obscure it. That would allow some lead time should another opening appear in the cloud deck (and one or two did) whilst the telescope was tracking. The telescope is the largest refractor I've ever used and it moved smoothly and easily with the turn of a knob. I got one good, brief look at Saturn but that second or two hinted at how good the telescope is: I glimpsed at least three of Saturn's moons, some banding in the planetary body, and my first look at the Cassini Division — the dark separation in the ring system.  And that was on a night of poor seeing!

The conference ends tomorrow (Sunday) with a half-day of sessions, door prizes, and a fond farewell to the Observatory Center. I may post one more photo here, but I'll have much to think about and photos to share and enjoy for quite some time to come. It's been a good visit.

2 comments on “A good visit to an old observatory”