The “other” Cincinnati observatory

There are actually two observatories at the Cincinnati Observatory Center. The original Cincinnati Observatory was located on Mt. Adams with a cornerstone (laid by John Quincy Adams) in 1843. That facility earned the moniker, "Birthplace of American Astronomy" was equipped with a 12-inch Merz und Mahler refracting telescope. The widespread burning of sooty coal sullied the air such that, by the 1850s, astronomy from Mt. Adams became impractical. A new site for the observatory was sought and that was Mt. Lookout, five miles away from the original location. 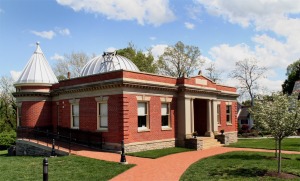 The new observatory was built in 1873. The original telescope was installed and used at the new location. To keep up with technological progress, a new telescope was purchased in 1904 — the 16-inch Alvan Clark machine from the previous post. Happily for the original telescope, and for the public, the older and smaller Merz und Mahler instrument was still valued. 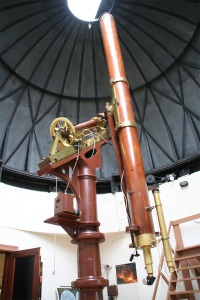 In 1904 a second, smaller, observatory facility was built –the Mitchel Building, named in honor of Ormsby MacKnight Mitchel, founder of the Observatory– to house the fine old 12-inch which has a wooden optical tube assembly! The 12-inch was installed in the Mitchel Building where it helped maintain the tradition of public viewing begun at the original 1845 site and which continues today. How many generations of Cincinnatians have looked through that grand telescope, the same old glass as their forebears, and wondered at the starry realm above them?

During the conference along with other astronomers, historians, telescope experts, and preservationists, I was afforded full access to the Cincinnati Observatory grounds and facilities. It was a wonderful experience and a joy to see the institution flourishing in the 21st century.

2 comments on “The “other” Cincinnati observatory”