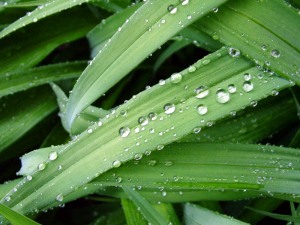 Diamond Drops on Emerald Leaf
We spent Saturday doing mostly practical things: grocery shopping, gardening (She), a thorough cleaning of my car (me… finally). Then, as the skies grew hazy with a layer of thin clouds, I headed off to the Observatory for a scheduled open house and public stargazing session — it was national Astronomy Day.

Saturday evening the clouds gave the Moon –even through the telescope– a hazy look. Yes, we could see detail, beautiful detail, in our views of Luna but the overall effect was one of looking through a thin blanket of fog. As the Moon sank behind our neighboring line of trees and the skies grew darker, I turned the big telescope to Saturn — one of the few identifiable objects in the sky. It was beautiful! First we looked at the Ring World at 100X and it was good, though tiny. Next we saw the planet at 133X and it was still very good. Finally I bumped the power up to 266X and the view was glorious! We could see hints of color in the planetary body, glimpses of cloud banding, and the ring shadow across the face of that world more than 800 million miles distant. We also observed the planet's shadow falling across the rings as they passed behind that globe so far away. More than one visitor, on realizing what they were seeing, was awestruck. Over the evening we hosted 23 visitors of all ages and looked at Saturn again and again. It was a good night and perhaps my best-ever observations of Saturn.

Sunday was Mother's Day so, sleeping in a bit after a long night, we headed west and into a couple of hours of rainy driving. It was wet, chilly, and miserable but a fairly easy drive to see Mom and my sister with her family. All three of use kids brought or sent flowers: two planters and a corsage. Lots of flowers! Mom is doing great after her surgery, physical therapy, and balancing out of blood chemistry. My oldest nephew is excitedly preparing to move into a house he and his parents took from "delapitude" to coziness. We spent a pleasant afternoon catching up, had a pizza dinner –little work for anyone– and headed east, homebound.

This morning's email brought an update from Cincinnati regarding Howie, the cat. It seems he was picked up from the vet Saturday and moved into his foster home. After the expected adjustments there, he seemed to calm down and enjoyed being petted and spoken to. He didn't like being picked up, however, according to his hostess. I wouldn't be too worried just yet about him being anti-social… after all, he got put in a cage, neutered, then locked in a strange house all within about 48 hours! I'm not sure I'd want a stranger holding me, either!