Sunday morning in the attic 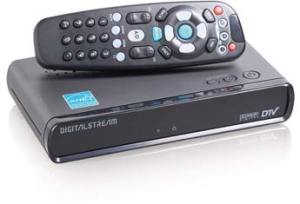 Radio Shack DTV Box
I spent several morning and midday hours Sunday (Nov. 30) at mother-in-law's house setting her up for broadcast digital television (DTV). She is resistant to signing up for cable television service but enjoys watching football and the news. Since her TVs are not equipped with digital tuners, we procured two DTV converter boxes for her through the government coupon program.

We looked at several models in several stores but settled on the one offered by our local Radio Shack. I hardly even opened the box before installation day but learned we'd made the right choice. My own mother's DTV box works just fine but has no volume control on the remote control — she must use two remote controls to operate her television! Fortunately she has satellite service so the DTV box is, for her, strictly for backup when weather or mishap stops the signal reaching her from orbit. The "Digital Stream" DTV remote does have television volume control on the remote. We set the boxes aside waiting for the right time to actually install them.

So we decided to spend this cold and rainy Sunday morning setting up the DTV converters for Mom-in-Law. I also hoped the boxes would finally give her clear TV pictures — an upgrade to her faint fuzzy analog reception. Up in the attic, near the peak of the roof I discovered, to my disappointment, the existing flat antenna wire had been strung many long years ago. There was no clear path to pull new coaxial cable between the attic, where the antenna was to go, and the living room. So I mounted the new digital antenna to a rafter, strung coax to a point where someone in the past had attached a matching transformer to the flat wire, and connected it up. In the living room, the reverse was done: connected new coax to the transformer that someone had connected to the flat wire down there. Then, with a minimum of fuss, I connected up the converter to the antenna, the TV to the converter, powered everything up, and scanned for channels. The main channels were displayed better on the old TV than they had been seen in years… maybe ever! One of the local channels is disappointingly weak and suffers from what I call "digital stuttering," but, in all, it's way better than before.

In the kitchen it was much easier: connected the converter box to the rabbit ears, the TV to the box, scanned and, because that TV is newer, was rewarded with even better picture quality.

So now she's got better TV quality and her TVs will keep working after the big national digital change-over coming in February. We still think mom-in-law would get more out of cable but that's her choice. It was a lot of fun doing something nice for her by spending Sunday morning in the attic!