I guess you could say today's test drive of the 2010 Honda Insight went well. We bought one!

She Who Must Be Obeyed decided earlier this year that our priority for big ticket spending ought to be a new car, and a fuel efficient model at that. So we started this process with serious intent though without desperation… Her car is doing fine. The thing is, her 1997 Civic is getting up in years and miles and, with age, is requiring more frequent and more costly maintenance/repair. It's the same way with people, though we have less resale value.

Anyway, She worked the numbers and I did most of the research. It was pretty easy to narrow the field to a couple of Honda products. Last week we tried out the new Fit (see previous blog entry). It was okay but not a great "fit" for us. Today, within the first half-mile of our Insight test drive we were pretty sure it was the car for us. 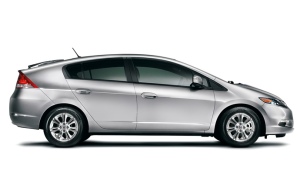 The car had only been delivered to the dealership in the wee hours this morning. We were the first at Sunnyside Honda to do a test drive of the new Insight (though someone had ordered one "Insight-unseen"). First the cabin, in the front seats anyway, seems to have the same sort of space we are used to with our '97 and 2002 Civics. There was no sense of "close elbows." As I piloted the car towards the freeway entrance ramp for an extended test route, we noted how quiet the engine was. The 1.3-liter engine purred to life as I pressed on the accelerator pedal and, with only a gage indicator giving it away, the integrated electric motor kicked in and we merged effortlessly into unusually heavy Saturday traffic. We weren't seeking a performance car but, surprising to me, the main problem I had with power was that I kept finding myself running over the speed limit. The smooth, quiet ride and purring engine didn't give a clue about our scofflaw ways!

I found I liked the heads-up digital speedometer and enjoyed the color-changing background which indicates just how "green" one's gas pedal behavior is. Outside air temperature was mild (mid- to upper-50s) and there was some sunshine so the cabin was warming. The Insight's very nice climate control system kept us comfortable through the entire ride. The instrument display includes a tachometer and fuel efficiency aids that can help drivers refine their driving skills and boost mileage still further. Honda's green-colored "Econ" button changes not only the preset operation of the drive system but also the very feel of the accelerator pedal — there's positive feedback in that foot control.

After trying out the most harrowing freeway merge operation I face on a near-daily basis (the Insight did just fine) we exited the freeway, returned the way we came, and headed for the hills. The road feel of the Insight was firm and steering was excellent –just the way I like it– without the harshness of the Fit's ride. As reported by others the vehicle does have one handling fault: severe oversteering. High-speed road hazard avoidance will bring this out. It is important, will require care, but was not a deal breaker for us.

The hills south of the Cleveland Area can be quite challenging. The Cuyahoga River cut a deep valley through the high ground and roads here don't bother with curves and switch-backs; they run straight up one side of the hill and straight down the other. You'd best have good power going up and good brakes or a bit of courage for the descent or the trip will not be pleasant. The Insight did well on both climbing and descending. Regenerative braking absorbs a good bit of the energy when one either coasts or brakes, charging the vehicle's big battery module in the process. We never felt we were running out of steam during a long, severe climb and the brakes? Well, they do their job but I didn't need to ride them on the way down.

At home we gave the car's interior a close inspection and a test fit of the very long case that holds my large telescope. The box (about 49 1/2 inches long) fit into the Insight's cargo bay e-a-s-y! In fact, it fit easier than it fit in the Fit. {Yeah, I had to put it that way!} With the rear seats folded down (they go very nearly flat) there's plenty of room for telescopes, luggage, flat-pack furnishings, whatever. Most impressive. The cabin was comfortable and contained many small storage nooks in which to lose small items. The fabric seats were comfortable (with an important exception*) and the driver's side chair was adjustable for height in addition to the usual position settings.

On the stop-and-go city streets we also experienced another of the car's fuel-saving features: auto engine off at stops. Bring the car to a full stop and after a couple of seconds, the gasoline motor shuts down saving fuel at zero miles-per-gallon. This very quiet car becomes nearly silent — only the soft whir of the climate control system, which reduced its speed, let us know the car was still "on." The engine stopping was not totally unexpected but, seeing as how this was our first hybrid driving experience, it was novel and a bit unnerving. Removing one's foot from the brake causes the motor to spring back to life and off you go. I brought along my little second-generation Apple iPod Nano and plugged it into the USB port of the EX's standard audio system; to my surprise it is already fully-integrated. The Honda logo appeared on the Nano's tiny screen and listening selections are made through the car's dashboard audio controls! I didn't need fully-integrated control of the iPod but it's a terrific bonus since I am usually listening to podcasts during my commutes.

*Aside from the oversteering there was only one other thing that bugged us about the car: the front seat head rests. The "Active Head Restraints" are designed to retract and pop forward in the event of a strong rear-end collision. Those wedge-shaped pads, however, are normally tilted forward just enough that they cause the driver and passenger to feel the need to lean forward a bit to avoid uncomfortable contact. Perhaps seat adjustments will correct some of that, but it is an important discomfort, a design flaw, and we wish it wasn't a worry. A gripe against Honda's equipment package:  The Cargo Cover (a window-shade like cover for the rear stowage area of the car) is a $195 option. Why? It seems petty to us that Honda makes that an "accessory."

So we ordered a car. We are purchasing the middle-tier Insight (the EX) in silver. It turns out the dealership had one already on order. The general manager discovered our car is on a cargo ship somewhere in the Pacific, and the car is expected to arrive in Middleburg Hts., Ohio next month.