I left the house this morning to take a nice pre-work nature photo walk around Hinckley Lake, hoping and expecting to see the low sun shining through morning haze. I also wanted to capture images of herons, imagining them backlit by that golden sunshine. As I left home it was sunny; when I got to the lake a few minutes later, the fog was so thick I couldn't see half a mile! Oh well, perhaps some moody shots. I got those and more.


While I was walking the lakeside path I saw the morning's first heron arrive, searching for breakfast. The big bird swooped down to the lake, alighted, and waded slowly in the shallows, a hundred feet or so away. I watched, shot some photos and moved closer. Herons are every bit as wild as their prehistoric look may suggest. Their call is a raspy "graaakk." They are also amazing to watch. Herons' wings span many feet and a few beats lift the magnificent creatures up and away with amazing grace and speed. That first bird grew wary of the human watching and took off. I began my walk back, photographing plants and flowers along the way. I came around a curve in the path and up popped the heron, springing off the shore and into the air — I'd been distracted and did not notice the bird until it was alarmed. I continued my hike back toward the parking lot, this time watching the lake for the heron I'd spooked twice already. Yes! The bird had found a new hunting spot not far ahead of me and I approached quietly, seeking a clear place from which to photograph. As I watched, the heron stabbed at the water catching a fish. Through the brambles I squeezed off a few shots with my camera, recording the last moments of life for the fish and a life-sustaining meal for the heron. Respectfully waiting for the heron to swallowing its prey, I walked a little closer, stopped, and shot some photos. Walked a bit closer still, stopped, and shot a few more images. Finally I got close enough for a couple of full-frame portraits of our big friend and that was enough… off it went! With a few wing-beats the great blue took off across the lake. I had just enough time to roughly frame the scene, firing off three or four photos and that was it. It was a fine, if brief morning adventure. 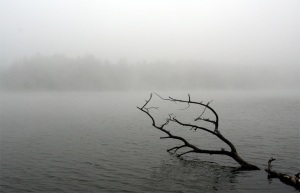 Heavy fog transforms the scenery at Hinckley Lake. I have a fine collection of shots from this morning that look like classical Japanese watercolors, even a few images with delicately colored tree blossoms floating before a moody, gray background.


The fog was burning off but still supressed most colors of the lake and trees. Foreground objects, however, retained their character in fine, soft light. A line of boats awaited park visitors and sunshine that really never arrived this day.

I headed home happy, even though I'd next need to head to the office. A lovely, foggy morning this was.

3 comments on “A lovely, foggy morning”