Upgrading the Dell out of it 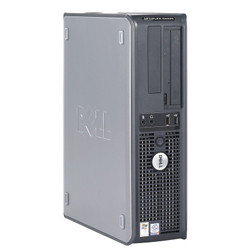 I upgraded my PC last night. The Dell OptiPlex GX620 now sports 3 gigabytes (GB) of memory and a second hard drive that has {gasp!} 325* GB of storage space. The C: (boot) drive remains in place with its 80 GB. I could almost hear my PC sigh with relief as it adjusted to the roominess.

Disk space was running short. Just before the upgrade there was only 21 percent free space on that single hard drive. That's getting to the point where crowding is felt.

Fortunately all seems to have gone well. I'm not certain the internal frame was intended for two hard drives but I was able to mount, securely enough, the new Western Digital HDD into the system. There were available SATA data and power hookups. The drive was not, however, visible to Windows XP when I started the system. I reopened the case, checked all connections, and then it occurred to me that there might be something the matter in BIOS. It turns out I actually had to enable the second drive in BIOS. Once that was done, everybody was happy. I toddled off to bed leaving the system formatting the new disk, something that took probably a couple of hours.

The whole thing was necessitated by digital photography. The new DSLR adds about 16 megabytes (MB) per RAW image I shoot, and I'm trying to switch to shooting only RAW. Even with reliable online backup from Mozy, I worry about loss of my burgeoning image collection. Though I haven't looked at them in years, I don't worry about the drawer of photographic negatives I generated in my time as a professional photographer. I'll also be moving files around on the PC in preparation for a "clean" install of Windows 7 this fall. Having your data on a physically separate hard drive is a good thing when you're planning on wiping out everything else!

Hmmm…. I wonder how many terabytes of data those negatives represent!

* I'm not a big fan of hyper-sized hard drives as I believe they are at greater risk for problems. The new drive was actually the lowest-capacity desktop model I could find on the shelf at Best Buy! Terabyte and half-terabyte models were the most common.

5 comments on “Upgrading the Dell out of it”