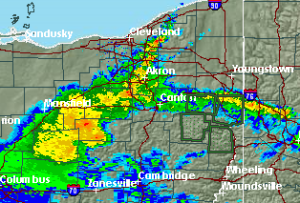 At 10:00 tonight we heard a low rumbling sound. I thought it was ambient sound effects on a TV show but it sounded like it might be coming from outdoors. I muted the TV and listened… more rumbling. I stepped outdoors into the cold, damp air. The overcast sky glowed the ugly red-orange of modern light-polluted suburbs, the night was quiet with little wind. I looked up, watched, and listened. Sure enough… a white flash lit the clouds directly overhead followed by the familiar low rumble of thunder. We've been hearing regular thunder for about an hour now! It's 38 degrees, quiet, misting, and there's a thunderstorm in progress as I write this! I guess it's spring, alright.

Update: Last night's storm went on 'til around midnight in our area ending with a crescendo of rain and thunder; the frequent booms startling me several times as I tried to fall asleep. Sadly a fire, apparently caused by a lightning strike, destroyed Cleveland's beautiful Euclid Avenue Congregational Church, A Romanesque building of Ohio sandstone dedicated at 9606 Euclid Avenue, in September 1887. Any portions of heat-weakend walls still standing will be demolished.