A most pleasant project 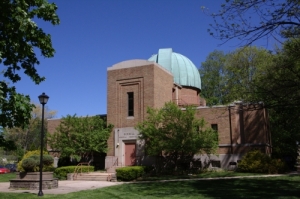 Burrell Observatory
Last night I was working on a Web page I've maintained for some time attempting to catalog astronomical observatories in the state of Ohio. Surprising to many, our state has quite a heritage in astronomy and, in fact, is home to the nation's second-oldest observatory structure still standing: the Loomis Observatory in nearby Hudson. Reviewing my images I found that it was time to make a new picture of the Burrell Observatory at Baldwin-Wallace College in Berea. Since it was an absolutely beautiful morning, I stopped by the grounds on my way to the office today. I think I got a fairly nice portrait out of the trip. About the only thing I'd change is the position of the dome's shutter but I won't complain too much there — I didn't call ahead! My eventual goal is to complete my own production of Ohio observatory portraits along with pictures of the telescopes those places house. I've got another one on my list for, maybe, next week. A most pleasant project.

3 comments on “A most pleasant project”