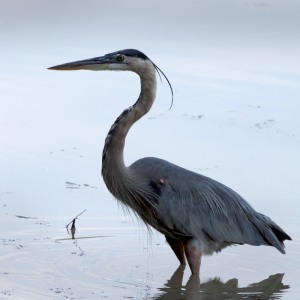 What?! #1751
Fridays off with not much to do are a good thing. I did not plan to go to Hinckley Lake this morning but the day began too pleasantly to spend much time indoors. I tossed the camera bag in the trunk and headed out. I stopped along the way to watch and photograph turkey vultures, perched on bare tree branches, warming themselves in the early rays of the sun. At the lake, I set off to see what birds {herons} I might see. Checking their favorite haunts from the lakeside trail, I was richly rewarded. In one of those favorite spots, I crept towards the water and peered around the lakeside vegitation. There, a literal stone's throw away, was a Great Blue Heron standing still as a statue. We regarded each other cautiously and I squeezed off a few shutter clicks. The bird was nervous. I was being attacked by mosquitoes. Not a good combination for a photo session. Off flew the great bird but not before I made my catch of the day! There were other beautiful scenes to be enjoyed and recorded as I hiked around the lake. None, however, matched the close encounter with one truly great bird. It was a surprising morning.