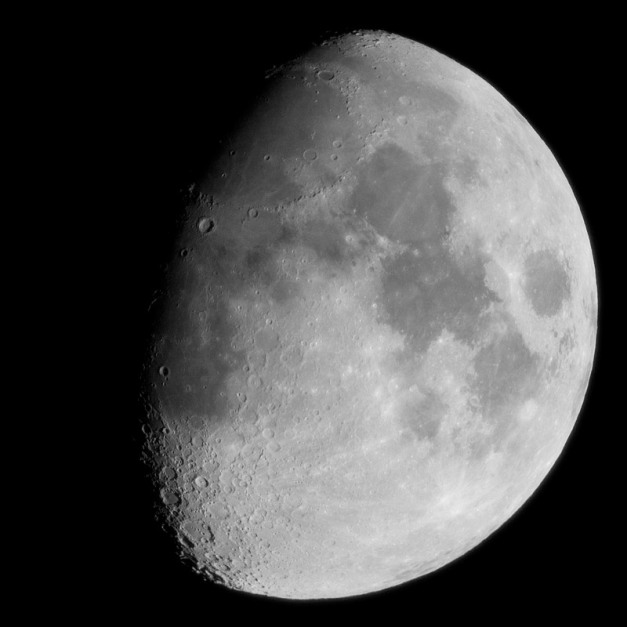 Last night, September 18, was the first annual International Observe the Moon Night: a time to celebrate Earth’s closest neighbor in space, her own Moon. The forecast for the night called for mostly-cloudy skies and that’s what we were seeing in the early evening and when I headed to Stephens Memorial Observatory. I’d made an online posting stating that I would open the doors at 8:30 PM no matter the weather but if cloudy, would close at 9:00. Strange how things happen. As the appointed hour approached an opening in the clouds appeared overhead. At first the Moon was very hazy, then clear enough to offer fair views. I worked inside the dome preparing the big telescope for public use. By the time I opened the dome slit, the sky was completely clear of clouds! Over the course of the evening 33 visitors came and went and saw the waxing gibbous Moon and, later, Jupiter. The Moon put in a glorious appearance through the telescope’s vintage low-power eyepiece. Jupiter, still minus its Southern Equatorial Band or cloud belt, was also seen in good detail: the Northern Equatorial band was visible and, better still, we got occasional glimpses of cloud bands in Jove’s southern hemisphere. The four Galilean moons were also brightly present: three on one side, Io by itself on the other. Late in the evening clouds again intruded first covering the Moon, then Jupiter. Finally Jupiter would wink in and out of visibility as smaller and smaller openings in the clouds passed offering seconds-long glimpses of the beautiful distant scene. Jupiter was near its opposition this night at a distance of about 368 million miles. When told about the distance one woman exclaimed, “you can see 368 million miles with that?! {telescope} I closed the dome at about 10:45 when sprinkles were felt falling from the sky. The people were engaged and enthusiastic and the sights were quite wonderful.