The dome at Ritter Observatory will soon open on to a starry sky in Toledo, Ohio.

As guests of the Toledo Astronomical Association and the University of Toledo’s Astronomy Department, She and I received a grand tour of the Ritter and Brooks Observatories the afternoon of October 1. Grand it was! First we saw the century-old six-inch “Brashear” telescope of the Brooks Observatory. It is perched high atop a building on campus and serves as the centerpiece of the Department’s public outreach effort. The fine old scope is in an unfortunately cramped dome that makes use difficult. Nonetheless hundreds view through it every year.

The big –and I do mean big— surprise came when we visited the Ritter Observatory. A white stone multi-story building is capped by a large white dome. Inside that dome resides the largest telescope in Ohio, the centerpiece of the University’s Ritter Astrophysical Research Center. Built in 1967 by Cleveland’s Warner and Swasey Company the Ritchey-Chretien reflecting telescope is equipped with a 1.06-meter mirror made by Owens-Illinois glass. Despite being under Toledo’s “light dome” and located on a busy city street, the big instrument is employed nightly in research projects that are largely unaffected by the light pollution: spectrographic work involving “long-term monitoring of variable stars that have winds, circumstellar disks, or active envelopes”. It was surprising and exciting to see a telescope of that class close-up and to learn it is actively used in astronomical research. Also fascinating is how the instrument has been integrated into the building itself, occupying more than one floor with fiber-optic and electronic conductors leading to other floors for data gathering, analysis, and telescope control. Quite fascinating. A grand tour, indeed. 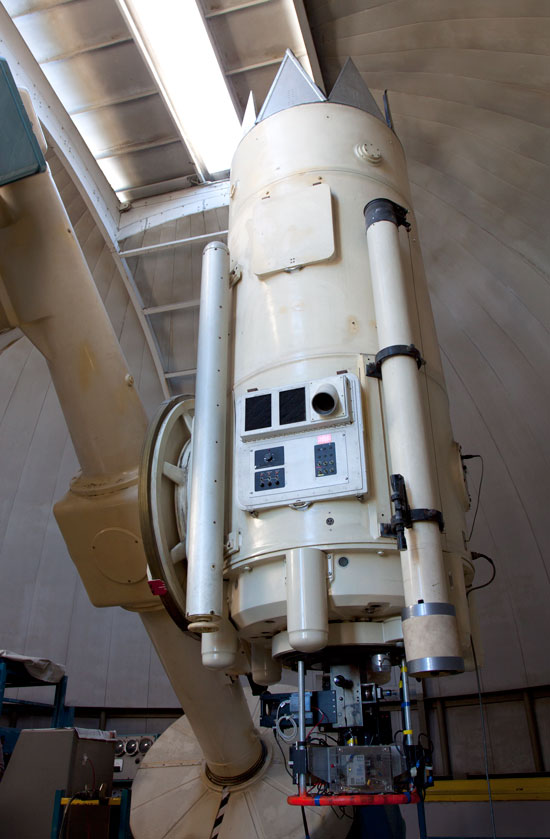 Largest telescope in Ohio is the Ritter at the University of Toledo. Its mirror has a diameter of 1.1 meters.