Life and death, death and life 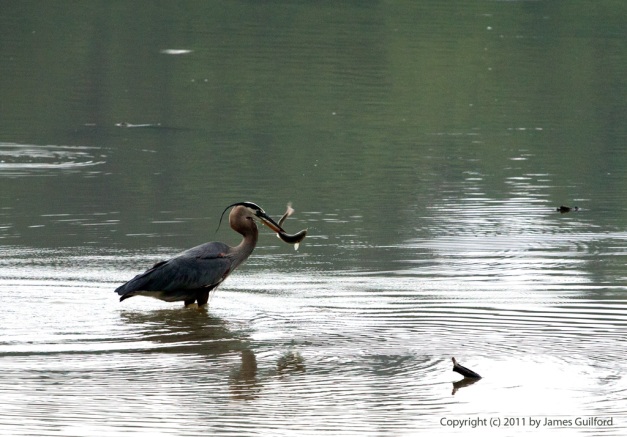 A Great Blue Heron with a fish it has speared with its lower beak.

I’d taken the day off in order to deliver Tasha to animal hospital for iodine 131 treatment … a cure for hyperthyroidism. Yesterday I received a call from the hospital informing me of their need to postpone admission. It seems there is a shortage of iodine 131. Without the treatment, and because of her apparent sensitivity to methimazole, Tasha would remain untreated until the rescheduled date for the procedure; her thyroid levels might return to their formerly dangerous highs. So I decided to take advantage of my scheduled day off. I would pick up a prescription of methimazole gel for trans-dermal dosing (less trouble for Tasha) at the compounding pharmacy which has very limited mid-afternoon hours. My morning was open so I headed to Hinckley Lake for the first time this season or even this year. It was a comfortable but hazy morning with thin to moderate overcast as I began my little hike along the lake. On the walk “out” I saw no large wading birds at all –unusual, I think– but was content to look around at the quiet beauty of the area. Low rumbles of thunder began but seemed to be to the north and west of me. As the skies darkened I felt I’d better turn around and so began a somewhat faster walk back around the lake. As I approached one of my favorite spots for finding herons I did, indeed, spy one. It was wading slowly through the shallows, apparently looking to spook a fish and find a meal; that’s just what happened. The Great Blue Heron struck lightning-fast and hauled a writhing fish from the muddy waters. The big bird had speared the fish with its lower beak. It held its prey aloft for a bit, lowered it into the water briefly, and repositioned the fish so it was head-first in its mouth. Then it lifted its head high and in a few gulps swallowed the fish. In less than a minute it was all over. The fish was gone and the heron was again wading slowly through the muddy waters, seeking another meal. It’s the way of nature: life and death, death and life.

2 comments on “Life and death, death and life”