Sometimes a wrong turn is the best 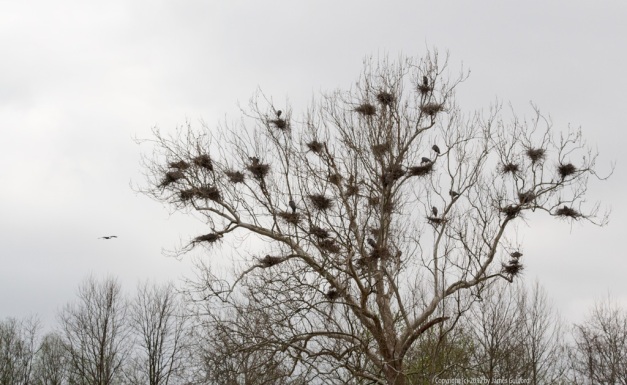 We were trying to make our way from Point A to Point B this afternoon when, somehow, I missed a turn. We wound up traveling south instead of north — pretty easy to do on unfamiliar roads and under overcast skies — and traveled quite a distance from where we wanted to be. We also didn’t spring for the navigation package for the Honda Insight; I don’t regret that, however. Since we had no schedule there was no pressure so, as we realized the mistake, we simply turned and headed north, carefree. As we drove we began to recognize some names of crossroads and knew that some would take us into the Cuyahoga Valley National Park and toward Peninsula. As we progressed along Bath Road we saw a group of people gathered along the side of the road, several of them crossing the road to stand along a fence; they were all looking at the trees. Oh yes! It’s the Heron rookery! Of course we stopped. I happened to have my little old Canon Digital Rebel XT with me so I shot photos as we watched the Great Blue Herons gliding down to the fields and lofting back up to the trees with twigs and branches. A birder I spoke with said the herons were nesting early this year because of the warmer weather. We were very lucky to happen across the scene and stood and enjoyed the activity for some time before continuing our trip. Sometimes a wrong turn is the best.

Great Blue Heron settles in on a treetop during nest building.