Way too soon to be thinking about work

In a tangle of beaks and necks, a Great Blue Heron feeds its young

Today was a day off due to the Memorial Day holiday observance. Our little town had a solemn ceremony at a local cemetery that is home to a war memorial. We spent the morning revisiting the Bath Road heron rookery and neighboring Ira Road/Beaver Marsh nature areas in and near the Cuyahoga Valley National Park (CVNP). The rookery continued to be noisy with the chatter of the many birds occupying nests high in the trees. Once in a while a bird would leave seeking food or arrive bearing it for the burgeoning young. It’s hard to spot the birds amongst the trees but those nests that are visible harbor several large birds these days. I did manage to capture one bird feeding another — a tangle of necks and feathers — though that was even harder to see! Human families, too, dropped by to see how their avian counterparts were doing. I think in many cases the parents were more interested than their children in what the birds were up to but I was heartened to see so many people out appreciating the show. 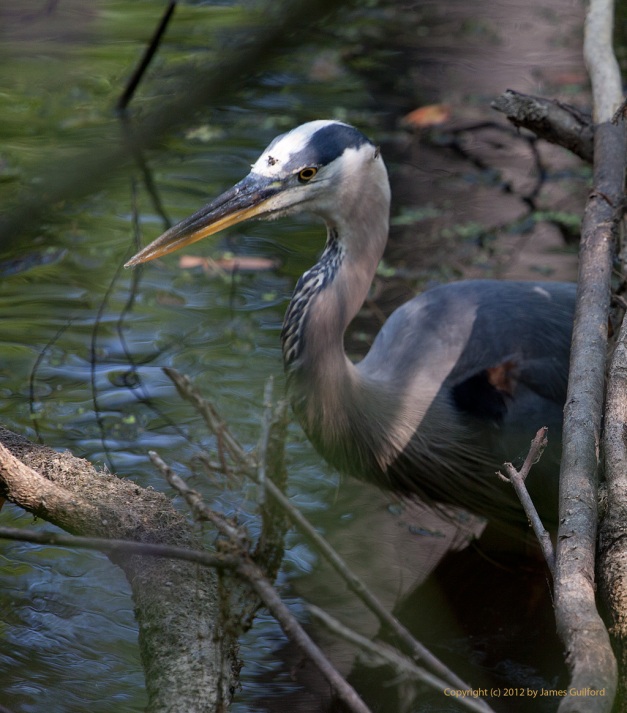 A young Great Blue Heron quietly wades in the shallows with biting flies pestering it all the while.

The Towpath Trail, key to much of the popularity of the park, was seemingly busy as a freeway with families out riding their bicycles. Though a cyclist myself, I nearly forgot where I was and almost stepped into the path of an oncoming cyclist! Among the many visitors to these particular areas, however, were many birdwatchers. A small group of them, along with us, was surprised when a young Great Blue Heron alighted on a tree branch only about 20 feet overhead. After a quick preening, the bird glided down and landed in the shallow waters of the Ohio & Erie Canal, just south of the Ira Road Trailhead. She Who Must Be Obeyed and I quickly and quietly hiked down the trail to see what we might see. We were treated to close-up views of an apparent juvenile bird as it slowly waded in the shadows, seeking a meal. Though we were close, the heron seemed either not to care or was unaware of our presence as we took turns shooting photos from the bank of the canal. Plants and twigs blocked much of our view so when we felt we got as good photos as we could, we left the heron to its work and headed north on the trail.

Baltimore Oriole perches on a branch not far from its nest

We enjoyed the short walk along the canal and up to Beaver Marsh where nature-lovers were watching Tree Swallows, Wood Ducks (and ducklings), turtles, and fish. Nature watchers happily pointed out their discoveries to each other helping us, by the way, to see a Baltimore Oriole and her nest. The day was hot and humid so we sought shade and lunch around midday. It was, however, a fine day out once again and way too soon to be thinking about work!

4 comments on “Way too soon to be thinking about work”