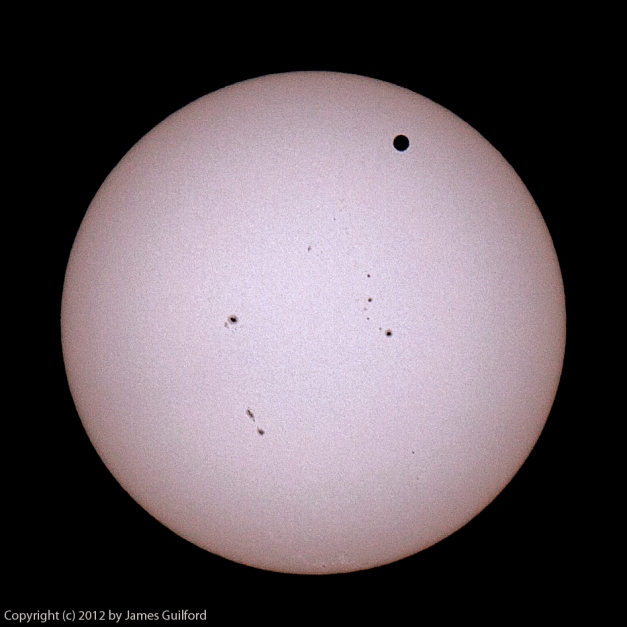 In this photo we see Venus (dark disk at the top), several sunspots and sunspot groups, and granulation of the photosphere – the boiling surface of the sun!

More than 105 people ranging in age from kindergartner to senior citizen took a look at the transit of Venus through telescopes I set up at the former site of the Hiram Elementary School near the Hiram College campus. The once-in-a-lifetime experience was nearly a washout as drizzle and overcast loomed over the area. I set up the telescope mounts in a light drizzle but kept the telescopes in the car – I was discouraged, nearly in despair, and believed we would see nothing. Just a few minutes after the astronomical event began at 6:04 PM, however, the clouds began to thin, then part, and clear views were enjoyed through the rest of the event! Sunset behind a row of trees ended the occasion at about 8:20.

Because I was the person setting up and focusing the telescopes, I got first view and, while I did not see Venus at its first moment of transit, I did observe it between first and second contact. I also observed the thin aureole of Venus’s atmosphere as it bridged the solar limb!

I was gratified by the excited and appreciative audience and thanked all who attended the informal event. I had no idea the general public would be so thrilled at the sight of Venus and our Sun together!

People who looked through the three telescopes I set up were treated to different views of the same scene: through a Baader Herschel Wedge (green tint), through a Thousand Oaks orange filter, and through a Lunt solar telescope. In every telescope viewers could see the solid black disk of Venus floating starkly against the Sun. A good assortment of sunspots could also be seen, including web-like detail inside some of the larger marks. In the solar telescope, tuned to what is termed “hydrogen alpha” light, attendees could see solar prominences — massive fountains of plasma towering thousands of miles above the Sun. Once people discovered that view, it became a favorite.

The photos were shot in moments between tending to the telescopes and informing viewers of what they were seeing. They were shot using a Canon 400mm lens with Baader solar film filter, and my Canon EOS 50D, at ISO 400, f/8, 1/1000 sec. What appears as photographic grain is actually patterns in the photosphere — the visible surface of the Sun. 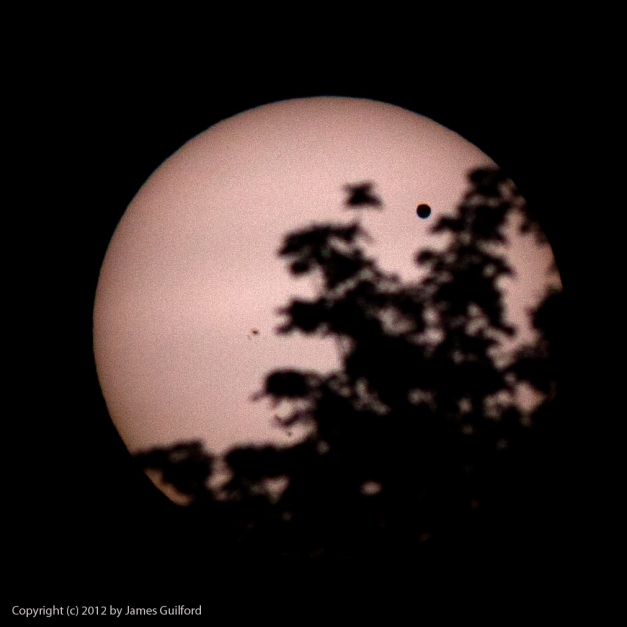 Our friend Maya wrote a haiku about a missed appointment with Venus. Rendez-vous manqué

2 comments on “Drizzle, despair, delight… the Transit of Venus”