Pick of the day, a year in the making 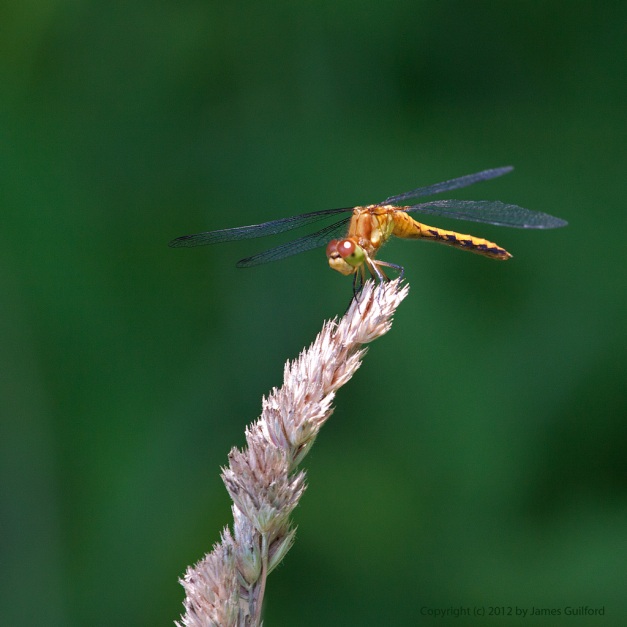 Could it be? This yellow dragonfly appears to be a female “Little Blue Dragonlet”, counterpart to the male I recently photographed in an obelisking pose!

It was a much warmer day than I expected with the high temperature reaching about 87 degrees (F). Still, I decided to pay a visit to the Columbia Reservation of the Lorain County Metroparks System for a good, long walk and to shoot some dragonflies — shoot pictures, that is! The walk on the park’s gravel trails was plenty warm but it felt good to be out in the woods and by the wetlands. The only nuisance came from a few deer flies — no mosquitoes approached me, even amongst all the wetlands. The ever-present Red-Winged Blackbirds scolded from their tree-top perches. I spotted a Great Blue Heron and a Green Heron as they flew from one site to the next. Dragonflies buzzed all around! There was, however, one particular type of dragonfly I was really after: a yellow one! I’d spied one about a year ago and tried photographing it. I thought then I’d captured its image but, lo, the image was dramatically over-exposed –blown out, as they say– and unrecoverable. Since then I’ve refined some of my skills and believed I was up to the challenge. What should I see in the first 1,000 feet of my hike but a pretty yellow dragonfly! It was perched on the seed head of dried grass, just the same as the “lost” dragon, and in nearly the same spot as before. Of course, today’s was a different seed head and a different dragonfly. The grass swayed occasionally in the breeze but the insect held tight and posed so well. I shot photo after photo and, when I was through, I was certain I’d made a nice portrait of an interesting insect. It turns out the yellow dragonfly is the female Little Blue Dragonlet — Erythrodiplax minuscula — counterpart to the “obelisking” male I photographed recently at another location! I captured nearly 200 images this afternoon and will likely post a few more from today’s shoot. The pick of the day, however, was a year in the making!

4 comments on “Pick of the day, a year in the making”