A sucker for ordinary miracles 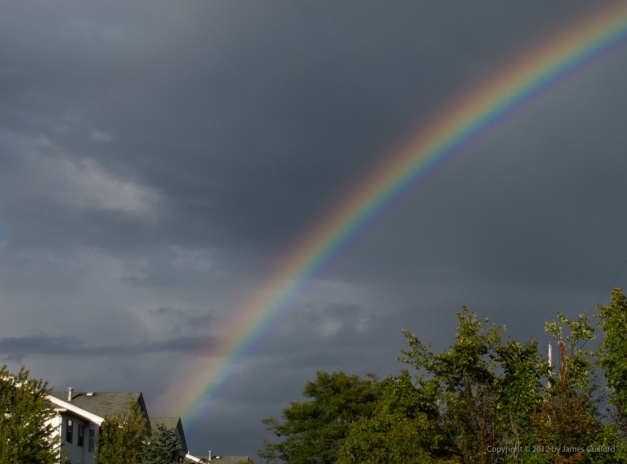 A portion of a full-spectrum rainbow and traces of concentric rings grace the eastern sky.

The skies began clearing this evening after a day of dull, gray clouds and occasional light rain. As I was driving this evening the sun began shining brightly from behind me and ahead, against a backdrop of dark cloud, a rainbow began to appear. As the sun grew brighter, so did the long, colorful arc — a full bow across the eastern sky. Of course there was little opportunity for a clear view of the spectacle so, at my first opportunity, I pulled into a parking lot, whipped out my Canon PowerShot G11, and made a few exposures of the brightest part of the rainbow. The colors were unbelievably intense and the full spectrum of visible color could be seen — most unusual! Traces of concentric bows could also be spotted but the bright bands completely dominated the scene. As I watched the colors began fading from the northern section of the rainbow, intensifying in the southern part — behind wires, trees, and buildings; the show was over for me. I’m glad I stopped as soon as I could. I’m a sucker for ordinary miracles.