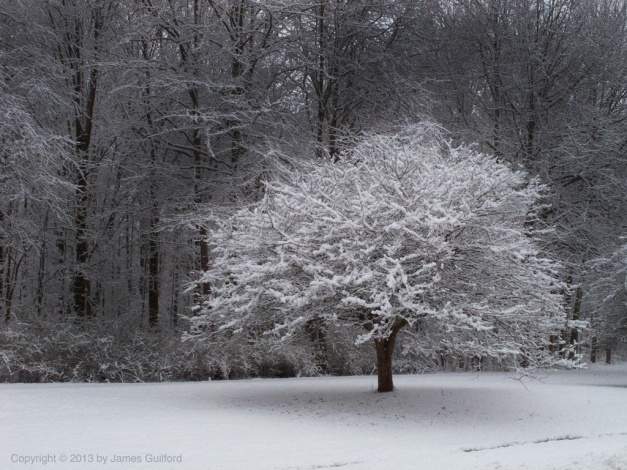 We’re nearly one week into spring, says the calendar, and today we received about four inches of very wet snow. Yep. Lots of wet snow. On the one hand, most of us are kind of tired of looking at it, much less dealing with the slipping, sliding, and shoveling. Then again, it can be very pretty. 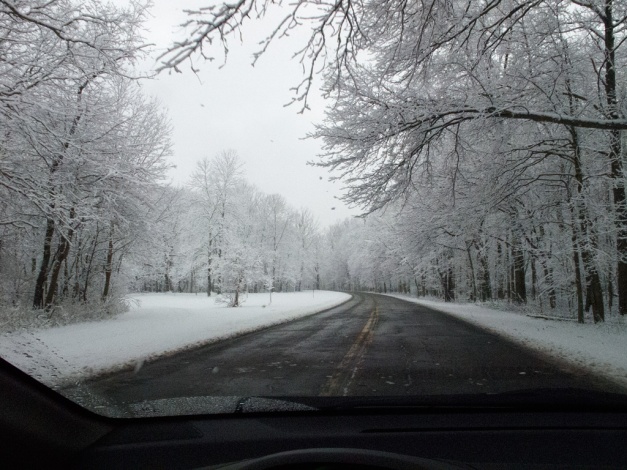 It was hard to keep driving.

Driving this morning was actually a pleasure. I took the most scenic route I know of to get to my destination. It was very tempting to stop every five minutes and take it all in. I did not stop every five minutes but I did stop several times, right in the road, to shoot photos from inside the car. I would make an exposure, look into the rear-view mirror which (I swear) seconds before was clear, only to find a car approaching, pushing me forward. The only real stop I made was at the Strongsville Wildlife Area where I hoped to see dark water surrounded by snow-flocked trees. I got a surprise. After spying on the Canada geese squabbling on the chilled waters, I turned to the left and, from inside the observation blind, was shocked to see a Great Egret standing only a few feet away. I had only my little PowerShot G11 with me and its operation is as near-silent as can be. Still, the great white bird allowed one photo, then took wing. I’ll bet that’s the same bird I spotted last summer. I’ll get ‘im yet!

Not a Snowy Egret but a Great Egret in the Snow!

The snow didn’t stick to the trees for long and later in the day, despite continuing spits of new snow, their branches were bare and dark. We may be ready for spring but we need to be ready for unexpected treats.