Cheetahs: a fine day for a visit 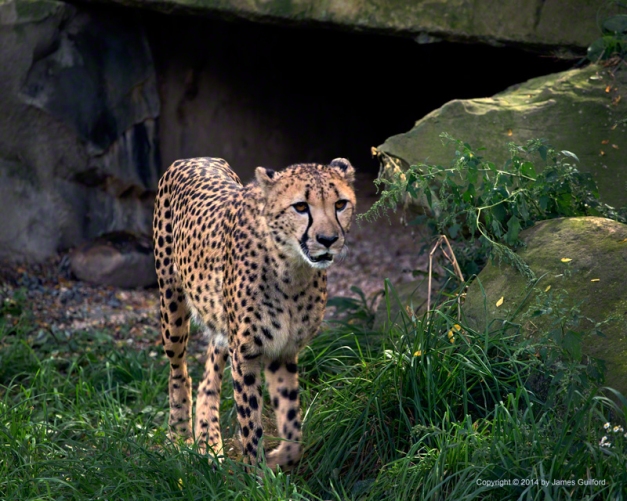 Beware! The Cheetah is on the prowl!

A recent visit to the Cleveland Metroparks Zoo gave us some unusual photo opportunities. The day was partly cloudy and cool and, because we arrived early, the park was lightly-attended. A surprising variety of animals from warmer climates were allowed outdoors and into the cool air. Big cats, Lorikeets, and elephants were enjoying the fresh air. Cooler weather also seemed to make the Cheetah pair friskier than they would be on a warm summer day. The beautiful, long-legged African speedsters were chasing each other around their large enclosure when we arrived. They broke off the chase and one of them performed a beautiful leap into a tree where the cat stood and watched the people watching him. We have seen the Cheetahs tracking human visitors (especially children) from their lair during previous visits and the animal stationed in the tree did just that. The animals gave us plenty of poses and my resulting images generated more “pluses” on Google+ than any of mine have enjoyed before! Pluses are signs of approval from other Google+ users who have viewed an image, similar to “likes” on Facebook. As we left the zoo in the early afternoon, new visitors were streaming in; a fine day for a visit.

Watch your step – You’re being watched!

2 comments on “Cheetahs: a fine day for a visit”