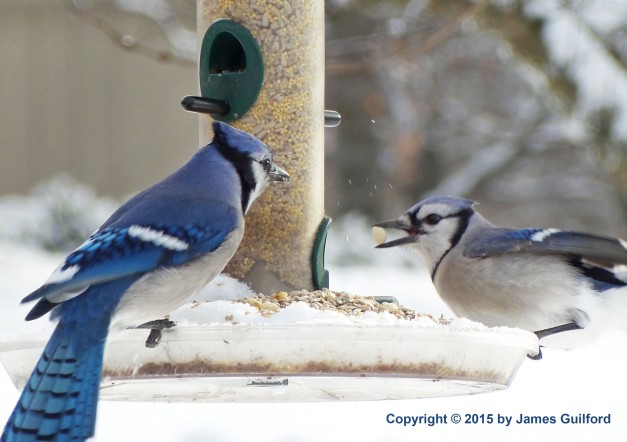 “Ha! Look What I Got!” – Cropped Image of Feeding Jays at Maximum Zoom

I find it very frustrating, seeing an interesting photo possibility but not having a camera. Some years ago I bought a Canon PowerShot G11 — a compact, rangefinder-like camera — and it has been a terrific little machine. The G11, however, is bulky and not really “pocketable.” Lately, I’ve been carrying an Apple iPod Touch which I acquired mostly for use as a PDA — a safe repository for personal data — but which was also useful as a communication device, when in a Wi-Fi hotspot, and as a snapshot camera. It is remarkable just how good the images from the Touch can be! Still, the iPod is really limited for a person as demanding as am I plus its internal battery isn’t holding a charge well these days. So I’ve been shopping.

I hadn’t really considered Samsung products due to my admiration and investment in Apple tablets. I’d forgotten they made a nice little camera-tablet hybrid… until Saturday!

Exploring Best Buy and looking at little cameras, I came across the Samsung Galaxy Camera 2 and was amazed at its features. The Galaxy was a camera, alright, with an excellent zoom range, nice big (for its overall size) lens, and a lot of good features and built-in capabilities — some not unlike those of the Camera app on my iPod. The Galaxy Camera is about the same length and width of the iPod but several times thicker and heavier but would fit into the pockets of my winter coat. The huge bonus, however, came with the tablet features built into the Galaxy: Wi-Fi connectivity with full-featured browser(s), GPS with image-tagging and map location functions, and a huge family of apps including my favorite tablet image processor (Snapseed), astronomy map (SkySafari 4), and Twitter. I bought it. 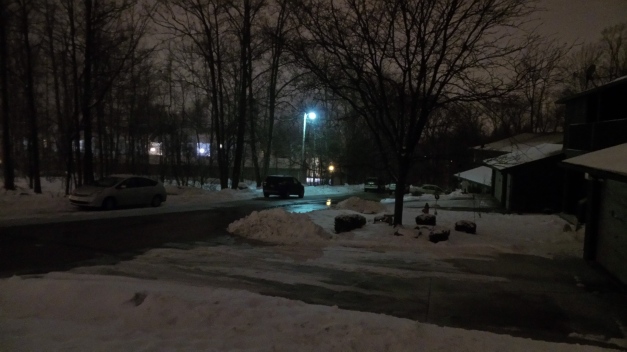 At home I learned even more about the new camera/tablet: An Android device put the Galaxy Camera in the “Googlesphere” which meant that, once I signed into Google, my contacts and calendar were automatically! With a replaceable battery, I can carry a spare and will not have to replace the entire device simply because a battery finally fails.

Testing the imaging has shown me (unsurprisingly) that the Galaxy will easily replace my iPod for a carry-everywhere camera. With its superior optical capabilities I don’t have to worry if a subject isn’t best treated with a wide-angle lens (as in the Touch) or if the scene is a bit dark; the Galaxy’s big zoom range and larger sensor cover a wide range of situations. I’ve yet to compare finished images with those of the G11 but, since I’ve not been carrying the little Canon with me, that comparison may not be important! Two issues, also not surprising, with the Galaxy that will be frustrating sometimes are the noticeable shutter lag and the system’s full reliance upon its huge touch screen for camera controls in advanced shooting modes.

I’ve much to learn about the new camera/tablet but I already like it very much. Having a fully-functioning camera combined with a small, powerful Wi-Fi tablet opens up some exciting possibilities.