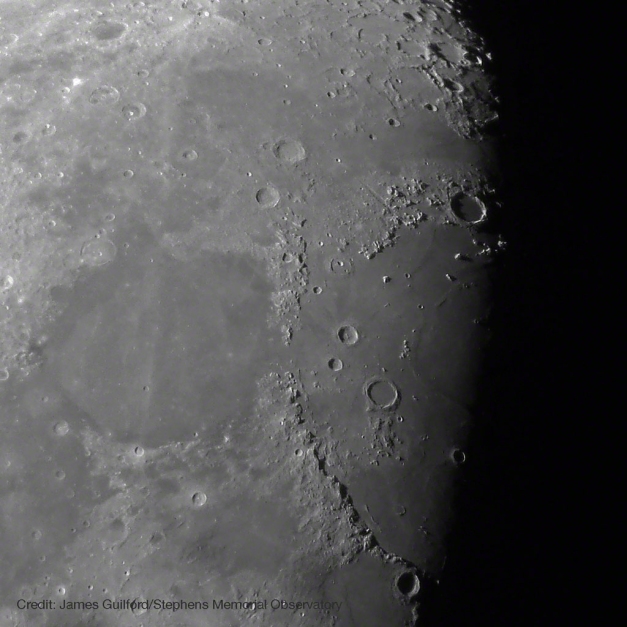 I can’t say as I blame them, the people who didn’t show for our observatory open night Saturday. After all, the temperature was about 19 degrees (F), damned cold! But the sky was clear and the waxing Moon was high in the sky. Both Moon and Jupiter were sharing constellation Cancer with The Beehive star cluster (M44). Still, those sensible people who stayed home and warm missed a glorious view of old Luna, especially half-lit Mare Iridium — the Sea of Rainbows. In my idle time waiting for visitors, I tried out a little afocal astrophotography using the observatory’s 9-inch Warner and Swasey telescope (ca. 1901) and my little Samsung Galaxy Camera 2 all-in-one. Most shots were a little shy of sharp, and all had some degree of chromatic aberration, and all had a big chunk of image missing where our century-old star diagonal is missing a bit of glass. One shot, however, did work out well, especially after a little fix-up including conversion to monochrome to eliminate color fringing. Not long after our seven brave visitors left, I caught sight of the indistinct reappearance of Jupiter’s Great Red Spot and that was it… time to close up and go home. My toes needed to be thawed.