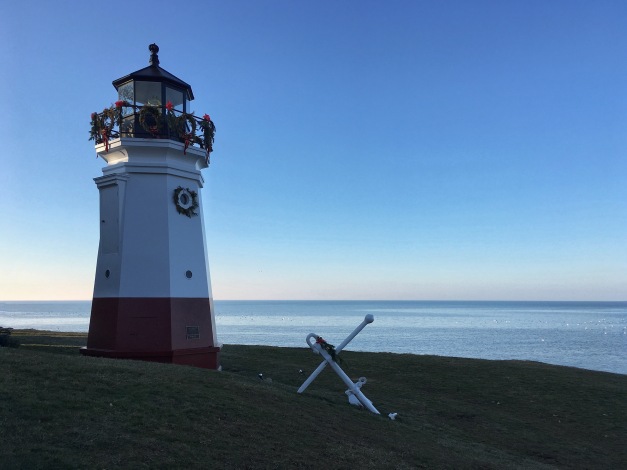 A little more than a year ago, we visited Vermilion, Ohio and its little Lake Erie lighthouse. That December, we learned the lighthouse was without light – it did not even contain its beautiful fresnel lens! Underway at that time was a community effort to raise funds and restore the historic landmark to operation. The goal was $40,000.

On New Year’s Day 2017, we ventured out on a beautiful afternoon and revisited the lakefront city. To my surprise and delight I spied something new in the little lighthouse: a brand-new fifth-order fresnel lens! The fundraisers had succeeded and commissioned construction of a hand-made lens that could project light far out over the Great Lake’s waters.

It turns out the glasswork had been raised, with help from the fire department, to the top of the tower and installed September 11, 2016. An official lighting ceremony took place the evening of September 15.

And so after going dark a decade ago, losing its lens to a museum move, the Vermilion light once again marks land’s end.