It was fun trying

Posted by Photonstopper on December 20, 2018
Posted in: Uncategorized. Leave a comment

Star Chart from the Beginning of my Quest – SkySafari Pro

I’d been reading articles about Comet 46P/Wirtanen and how it was making one of the 10 closest comet flybys of Earth in 70 years “…the brightest comet of 2018.” It certainly wasn’t a spectacular, or even very prominent comet: bright, with a long glowing tail. Others’ images showed a small, pretty, green glowing ball. Still, a comet’s a comet and most of us don’t get to see that many in a lifetime, so I thought I’d give it a try. The trouble was the weather. We, in Northeastern Ohio, have been experiencing an unusually long stretch of cloudy and overcast days and nights and the night of Wirtanen’s close approach (Dec. 16/17) was no exception. The night of December 28, however, was to be clear but (there’s always a but) the Moon would be bright and not far from the comet’s position in the sky. You’ve gotta go with what you’ve got so I set up my ancient but solid Orion telescope mount managing very good polar alignment.

Piggybacking a big DSLR camera atop a telescope, I waited til 10 PM so that Wirtanen would be high overhead where the atmosphere is thinnest. The night was cold –about 24ºF– but quiet. As feared, that Old Devil Moon had lit up the sky making dim celestial objects invisible. And waiting til my target was near the zenith may have made sense technically, aiming the camera straight up was literally a pain in the neck. Thank goodness the camera has an articulated LCD panel so I could examine results without having to twist my neck or move the camera.

Starting out, I adjusted the camera settings so as to not overexpose due to lunar and terrestrial light pollution. It turns out those first two exposures were very useful. Then I blindly aimed the setup and shot about 10 exposures at wide angle. I re-aimed and shot 10 again. (For best results, astrophotographers often shoot more than 10 times that many exposures of the deep sky.) Then I tried zooming in, hoping greater magnification might isolate my quarry. I peeked at the camera’s LCD panel for a preview. Oh. It looked like we had jumped to light-speed! The zoom lens, pointing straight up, had slowly slipped from around 85mm to 24mm during the multi-second exposure. It’s a really good lens, a Canon L-Series, but I normally don’t point it up like that. Gotta get myself an 85mm prime (non-zoom) lens. The lens did hold at 105mm so I shot a few exposures at that focal length. 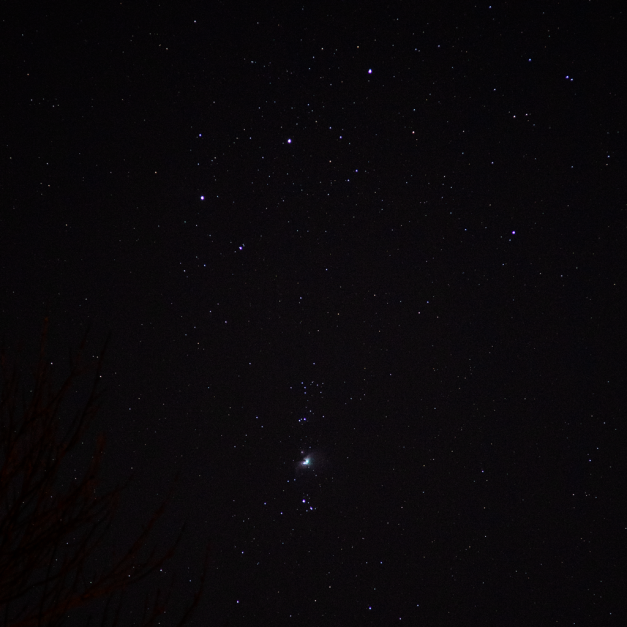 Feeling I’d done what I could to record a comet invisible to my eyes, I aimed the camera at constellation Orion’s belt and sword region now just above the trees, made a few exposures, and with cold fingers packed it in.

Riding the Telescope, the Camera’s View of the Sky. Think that’s a Comet in the Upper-Left?

As it turns out, I think I did image the comet but with all of the challenges and some inexperience at shooting “faint fuzzies,” the results were less than impressive: a hint of a glowing ball is all I got of dear, departing Comet 46P. The camera recorded far more stars than I could see in the far-less-than-perfect sky.

The Lens Flare looks Better than the Comet

I did get a pretty nice shot of Orion, which helped make the effort worthwhile.

Otherwise, not much to show for it but it was fun trying!