The uncommon beauty of the commonplace

The day was beautiful for a Sunday in early March — sunny and mild with a high temperature of 60ºF — so we headed out to a couple of favorite, easy-to-access spots for a little walking and bird spotting. 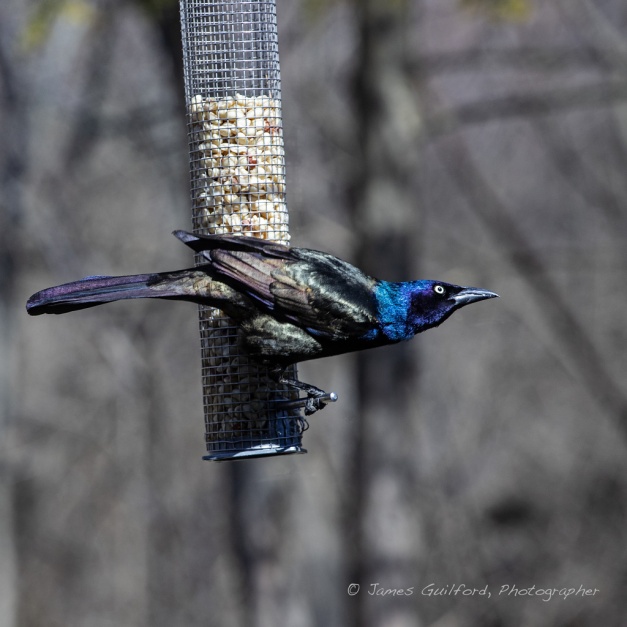 The F.A. Seiberling Nature Realm, a part of Summit (County) Metro Parks, features a beautiful visitors center with an observation room viewing a large bird feeding area. Today Common Grackles were the dominant presence. Bright sunlight and our angle of view brought out incredible iridescence in the birds’ plumage changing them from common to uncommon beauties.

A Great Blue Heron (Ardea herodias), on a nest-building mission, glides overhead in the afternoon sun.

Following a short walk on paved and dry pathways at Nature Realm, we made a little visit to the Bath Road Heron Rookery, at the northern city limits of Akron. There seemed to be fewer nests this year, one formerly-inhabited tree was entirely vacant. Seen in other trees were the stick nests and mated pairs of birds standing upon them. Occasionally a heron would glide down from a tree to search for nest-building materials, then loft them back to their waiting mate in the tree. I shot a good number of photos but this overhead view is my favorite of the day.

These are common, everyday birds going about the business of living; if we look at them closely and well we will discover the uncommon beauty of the commonplace.

Among the first Bluebirds to show up at my feeder, this one arrived after freezing rain enshrouded the feeder’s rain shield in icicles.

I’ve never seen them. I’ve never, ever seen Bluebirds in my yard or at my feeders. Until this month. 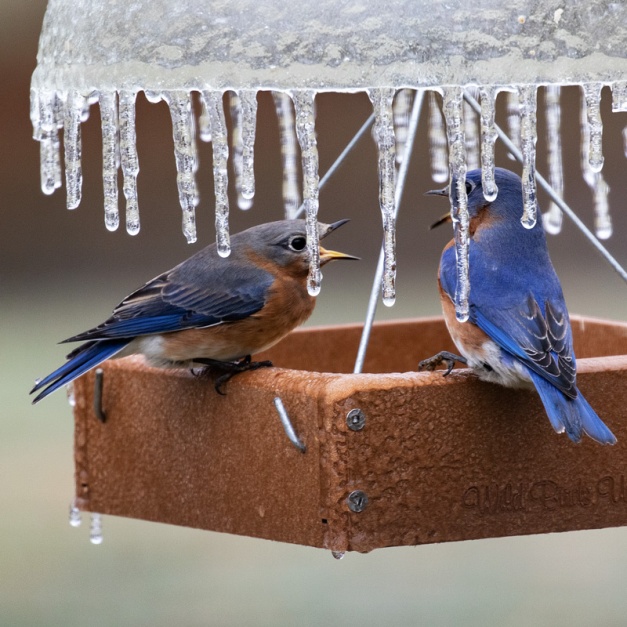 Wherever two or more are gathered, there’s an argument. Eastern Bluebirds on an icy birdfeeder.

First I saw a couple of Eastern Bluebirds (Sialia sialis) show up just after I restocked my feeders for the morning. They returned the next day and then there were three. Skip forward a few days and yesterday, February 12, I counted eight — eight! — of the beauties around the feeders, in neighboring trees, and on the ground!

One of the eight Eastern Bluebirds that appeared in my Northern Ohio front yard February 12.

I don’t know why this year is different but at a time when I could use some cheering up, the Bluebirds flock to the view from my window. And they do, indeed, bring happiness.

NOT Bluebirds but they can certainly eat a lot of bird seed!

The ones that got away

There was some excitement this dreary afternoon as this Cooper’s Hawk (Accipiter cooperii) first perched on a small tree in our front yard to stake out our bird feeder; then chased a couple of sparrows into a nearby row of barberries (seen here). This time the little birds escaped, rocketing out in separate directions at ground level from beneath the thicket and the predator. A pile of gray feathers beneath the bird feeder a couple of weeks ago were evidence that a Mourning Dove wasn’t so lucky as today’s sparrows. (Image shot though window glass and screen.)

Somewhere Across the Waters

Our wanderings today took us close to my beloved Lake Erie shoreline. The sky near the horizon was dark but the lake reflected a mystical light of green-blue. A few minutes well-spent gazing upon the mystic lake waters. 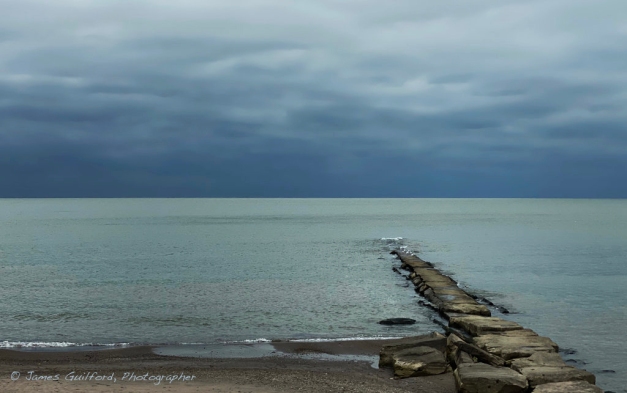 Into the Mystic Waters

A stroll in the Alderfer-Oenslager Wildlife Sanctuary at Wolf Creek Environmental Center led us out over the wetland area via boardwalk. Along the walkway was a late-season water lily bloom, floating on dark waters in the afternoon sun. Nearby, tiny green dots of plant life float. It was warm that day but cold days lie ahead. Nature knows.

On a walk today, I glanced down an alleyway and spied this scene: patio seating in a very grungy setting. The dreary skies softened lighting in an already-shaded area and amplified the mood of the al fresco table. I’ve ordered a replacement smart phone for my trusty iPhone SE that has served me so well so this may well be one of the last photos I shoot with its remarkable built-in camera.

NGC869 — Half of the Perseus Double Cluster.

I suppose one cannot return to something one hasn’t left. Still, with weather settling down and sunset coming earlier I’ve been looking to further explore the night sky.

We live in a small city with big light pollution. The light dome over our area has grown steadily over the past decade and from our backyard most northern stars lower than Polaris are completely obliterated by artificial light. To the south, the view is probably similar to “suburban” light pollution levels. Which is to say, bad but not impossible.

Lately I’ve been using my new telescope in imaging experiments. This week, unlike earlier recent efforts, I was able to get the telescope mount aligned well which allowed its computer to find dim objects in our bright sky. I was able to visually observe Jupiter (with Great Red Spot front and center), Saturn, the M15 star cluster, the Perseus Double Cluster, the Ring Nebula in Lyra, and the Andromeda Galaxy.

Attaching one of my DSLRs to the new Cassegrain reflector, I shot images of several of the larger deep sky objects. Vibration and tracking were issues, as was achieving camera focus. Working around those challenges as best I could, I made multiple images of the Ring Nebula (M57) and one of the clusters in the Perseus Double (NGC869).

Looking at the camera’s built-in LCD panel that night, I was astonished… I could see color in the Ring Nebula! Visual observers, using smallish telescopes, usually see no color in the Ring; film and electronic sensors readily collect enough photons to register color. Still, a very happy surprise to me! So I shot a series of prime focus images of the nebula. The Perseus Double was also visually attractive so I shot that as well. About 10 seconds for each of those. Efforts at shooting M15 failed: the telescope didn’t track well enough to produce round stars in the exposure time set — possibly too long an exposure.

Astrophotography of deep space objects can be extremely technical. The learning curve on an excellent product like PixInsight is more like a cliff than a curve. I searched and found a software that is excellent for me at my relative beginner level — Starry Sky Stacker (SSS). The SSS has the important basics for good astrophotography, and has an easy-to-learn image processing process with little frustration. So, to get started producing and learning, I used SSS to align, stack, and integrate the images for both NGC869 and M57 with results pleasing to me.

Over the coming weeks and longer, I’ll be assembling more equipment and skills and with luck, by spring, will be producing decent space pictures beyond the Sun and Moon.

We have had a few days recently when heat and humidity-driven storms have roamed the region. On Tuesday, August 20 we saw a long line of powerful, even severe-warned, storms develop to our west. Though the line appeared to be moving at a leisurely rate, I arrived at one of my favorite observation sites with just enough time to set up before a broad shelf cloud appeared on the horizon.

The leading edge passed over my location and, as is expected with these things, heavy rain immediately followed and I retreated to my car. After a quick splash of intense rain, the precipitation stopped! I got back out of my car and shot a few photos of the areas about to be visited by the storm. One view in particular from behind the shelf cloud: from a spot spared rainfall was this view of the dark clouds overhead, curtains of intense rain drenching the area, and brighter skies being engulfed. 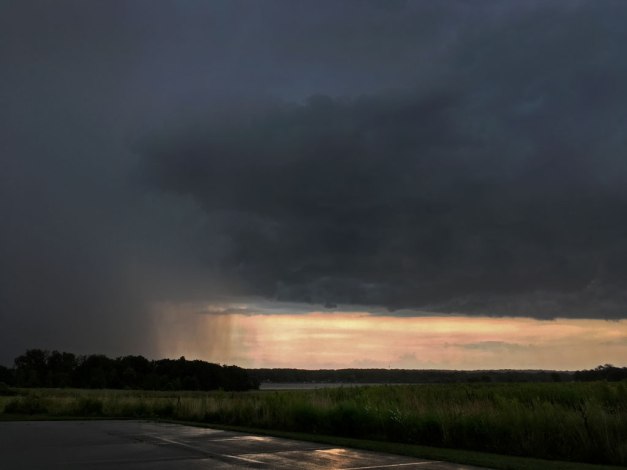 The very large to the very small

Saturday night I spent imaging very large objects: Earth’s Moon and craters measuring nearly 60 miles in diameter. Sunday I photographed a lovely Tiger Swallowtail butterfly (Papilio glaucus) as it sampled nectar from a flowering plant; then, during editing, I cropped in close creating an image depicting an area of only an inch or so square on that insect’s wing. I do love exploring things from the very large to the very small.

Even smaller details, an unexpected bonus emerged in the cropped image. The swallowtail’s wing was at a severe angle to the morning’s sunlight enhancing the view of the individual scales that cover butterfly wings.

And yes, the butterfly was photographed alive and well, and left in that condition! 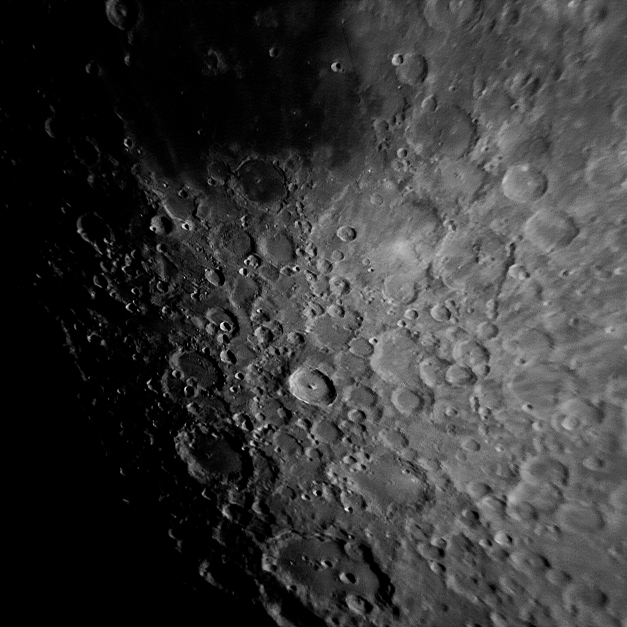 I was messing around with my recent soft-focused “antique” image of Moon’s Crater Tyco when I discovered a Photoshop sharpening feature I’d never used. I reprocessed the image using that setting and got a “better” result: sharper appearance of the crater itself but with more grain. I think I like this new one better than the one I originally posted. Here they both are: Reprocessed Above / Original Below.

Crater Tyco, Sea of Clouds to the north.

PhotonStopper
Create a free website or blog at WordPress.com.