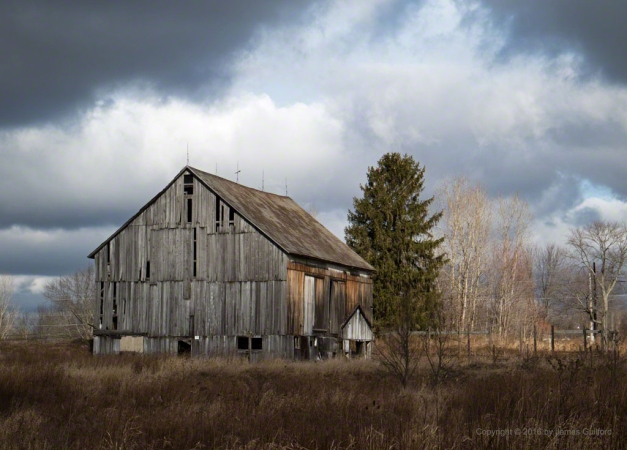 February started off cloudy and gray, as many days have been of late. During an errand to Medina, Ohio some blue sky and sunshine appeared through gaps in the rolling clouds; we headed to the Medina Woods Park and its Chippewa Inlet Trailhead. Strolling along the trail encircling a major wetland restoration area. Weather has been cold enough to maintain a thin layer of ice on areas of open water. Geese, ducks, and a pair of Trumpeter Swans stood on the ice, eyeing us warily.

Patches of sunlight shifted across the scenery, now and then illuminating an ancient barn on the property and bringing out colors in pond ice.

As we headed back to the parking lot, gaps in the cloud cover closed and overcast saw us off. Changeable skies, indeed.

On my way to where I need to be

A Place of Their Own

On my way to where I need to be, I try and look around. We are surrounded by everyday beauty and wonders. We see only a tiny fraction of what is offered us though it is all present; if only we would slow down. Look. Listen. Feel. This morning I paused to take in the first of the day’s light falling across the cold, still waters of shallow Baldwin Lake. Canada Geese were standing in shallow water streaming over a small dam. They watched me carefully and, judging I presented a possible danger, pushed off and into open water. Still water turned silver, reflecting the open morning sky. The geese had the lake, a place of their own. I had to move along, though I already was where I needed to be.

Today was the first day after the Vernal Equinox, it could be said to be the first full day of spring. For those of us in Northeastern Ohio, this fine “spring” day dawned with temperatures hovering at about 17 degrees (F) with a light coating of snow everywhere, and new snow lightly falling. Yeah, spring. Driving to my duties, I passed through the snowy spring wonderland gazing at many a lovely scene. Finally I stopped at a favorite place for morning pictures, the Lagoons area of Cleveland Metroparks, to record a scene or two. Dark waters set off snow-covered wooded grounds, and outlined the trees. Falling flakes clouded some distant areas. Amidst this seeming unseasonal scenery was a bit of a surprise. Two Canada Geese launched into the frigid waters to escape my approach and on their backs… a coating of snow. Spring? Well, it hasn’t “sprung” just yet.

Not much to write except to say the day started off nicely. The garden area tended by She Who Must Be Obeyed is sprouting beautiful new green. It has been cool and wet so my favorite foliage plants, the hostas, are looking very good.

To take a break from a day full of frustrations –installing a new server machine ought to be easy for me, but when the manufacturer and vendor strip it of all documentation, well, it isn't easy– I ate a quick Taco Bell lunch and headed for the Lake Erie Nature and Science Center in Bay Village. The Center is nestled in a beautiful suburban metropark and features exhibits and a lovely courtyard dominated by a large water feature. Wild and captive (injured) birds are in residence in the open and are both fun to view and easy to photograph.

I'm glad I took time out to enjoy a little open air and wildlife. The afternoon wasn't nearly as frustrating as the morning since I pretty much resigned myself to the fact I wouldn't finish the installation today! Left work for home and, hopefully, a good weekend. Viewing these photos tonight brought back good feelings of a lunch hour well spent.