Though obvious in these pictures, quite a few animals can become invisible by matching their environment to their color. A bullfrog, waiting for prey to come a bit too close or for his own protection against predators, may sit quietly in duckweed. If the frog holds still enough, perhaps he will be overlooked and gain a meal or avoid becoming one. The green dragonfly, also a predator, has the same advantages if it alights among green plant leaves. The dragonfly, by the way, was much harder to spot than the frog! These animals were spotted at the Columbia Reservation of the Lorain County Metroparks hiding in plain sight. 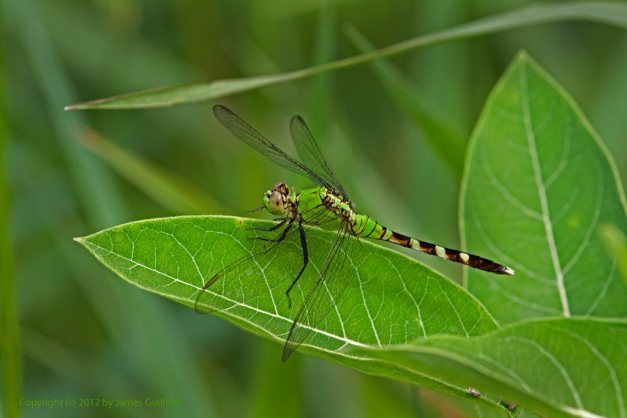 It is Labor Day. We awoke to chilly temperatures and skies that turned from partly cloudy to overcast as we ate breakfast. She Who Must Be Obeyed suggested we check out the Cleveland Metroparks’ Lake-to-Lake Trail. The trail, which we had never visited, runs along the eastern edge of the Berea area and into Middleburg Heights.

One of the uniquely decorated wooden deck bridges on the Lake-to-Lake Trail, this one features metal cutouts of dragonflies, each identified with a plaque mounted to its supporting post.

We were delighted with the experience, though both a bit sore upon return. Putting in a total of 5.4 miles, we covered most of the trail from Lake Isaac north to Lake Abram and back with a very pleasant stop at an Aladdin’s Eatery (a lovely advantage of suburban trail hiking) for lunch.

We stopped many times along the way to photograph plants, flowers, and wildlife including a very cooperative Green Frog and red dragonfly (Ruby Meadowhawk?), residents of a tiny pond area. The trail is mostly asphalt paved with an extensive system of wooden boardwalks and bridges to carry visitors over wet areas.

It was exciting and reassuring to see, from the trail, large expanses of marsh habitat undeveloped and preserved as natural areas in suburban Cleveland. And what a marvelous resource for area residents. Like us! 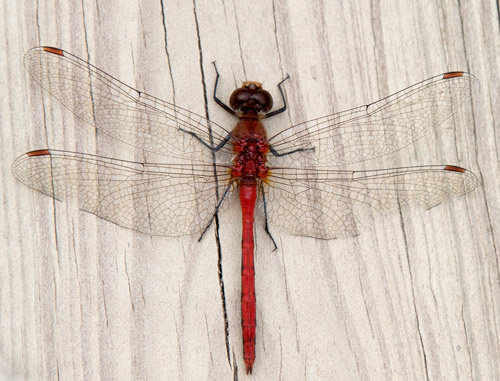 A red dragonfly (possibly a Ruby Meadowhawk) sat on a bleached wood railing as if posing for its portrait. The beautiful insect allowed two of us to make close approaches with cameras before flitting off into the reeds of a nearby wetland.

Thursday was a really, really lousy day at work! Started out in the wee hours with a power failure in the server rack, then a yahoo co-worker moved a couple of networked printers before their time putting them out of use, then the HR manager's PC died, and on and on and on. By the end of the day I was stressed out, my body hurt from head to toe, I was angry, frustrated, and I was physically exhausted having stayed up late with observatory programming the night before and scrambling to work an hour early when I discovered there was a crisis in progress. This morning was a time to unwind a bit on my way to the place of Thursday's torments. 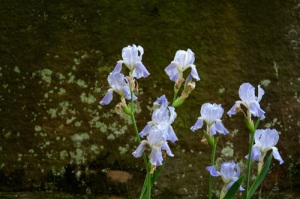 One of my favorite local places is a city park in Olmsted Falls. There, amongst hand-carved rocky walls, grow mosses, flowers, and trees. Nearby a river slowly wears down its rocky bed creating the falls for which the town is named. The light and the atmosphere are peaceful there. It's on my way to work.

Olmsted Irises #4781
Several varieties of iris grow there, surely planted by forgotten hands. They glow softly in the early morning light amongst the rock walls.


An unkempt and smelly lily pond is adjacent to the park's tiny parking lot. I was looking for frogs or turtles, and even heard but did not see a bullfrog. Then I noticed the tiny black dots floating amidst the tangles of pond weed… tadpoles! Hundreds, maybe thousands of tadpoles were swimming everywhere. Most were of a very small, deep brown or black variety dotted with yellow. What I thought were bubbles of gas burbling occasionally to the surface turned out to be much larger bullfrog tadpoles! They darted to the surface, gulped air, then dove back to the relative safety of the pond floor! 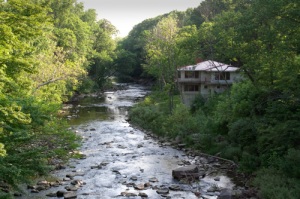 
Before leaving, I strolled to the bridge carrying a street over the river valley and crossed to the north side. There, perched just on the river bank, is a house of enviable location. Still, I got my respite and a bit of stress relief through a much less permanent visit to a tiny city park. One of my favorite places for, now, several decades, David Fortier River Park.

Ride of forest and frogs 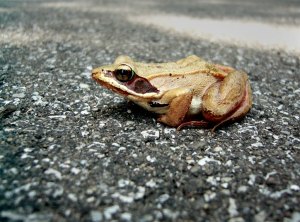 Wood Frog
Today we ventured east to try out the Maple Highlands Trail — a rails-to-trails conversion that stretches from Headwaters Park to Chardon in Geauga County, Ohio. The facility is beautifully designed, provisioned, and maintained. It is paved with asphalt over its nine miles, and is of gentle terrain for those of us who have not been riding our bikes enough lately to be strong as we once were — we know who we are! Shallow slopes, slow curves, woodlands, wetlands, and few road intersections make this a good ride. Many birds and dragonflies flew across the trail as we cruised from one end to the other and back again. Along the way I steered to avoid what I thought at first was a dead leaf, then maybe some poo… at the last second I could see it was a smallish frog. I stopped and turned around to take a portrait of the little amphibian before urging it off of the trail. We encountered one other frog, of another species, on the pavement but it was a little shy and refused picture-taking. It was a good ride on a warm and sunny day. Forecast for this week is cloudy with rain chances so we're glad we fit this in.

By the way, I shot the frog photo with Her older model Panasonic Lumix camera –Her first digital camera– and am very pleased with the result. We're offering the point-and-shoot to my mother as a replacement for single-use film cameras she has found disappointing of late. We'll see how it works out for her.