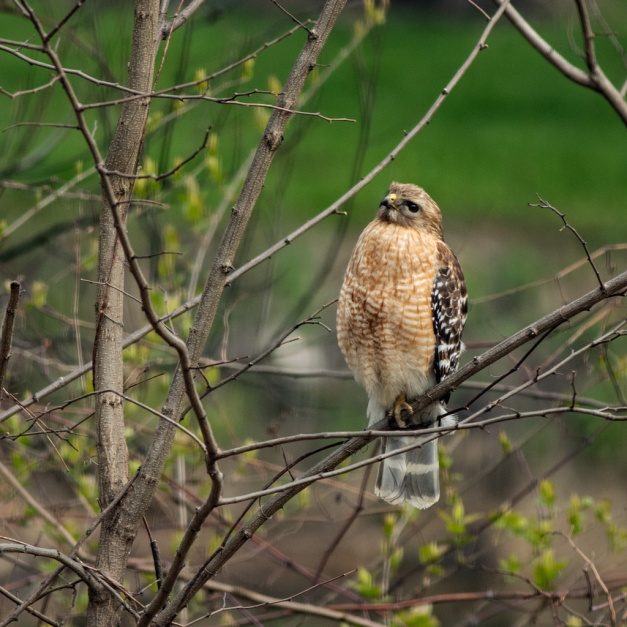 Our local Red-Shouldered Hawk alighted on a tree near our pond Sunday as it has been doing of late. The raptor — this one or a lookalike — has regularly rocketed across our front yard, staked out our bird feeder, bagged itself a Mourning Dove, dined on a bullfrog, easily earning the Murder Bird reference. 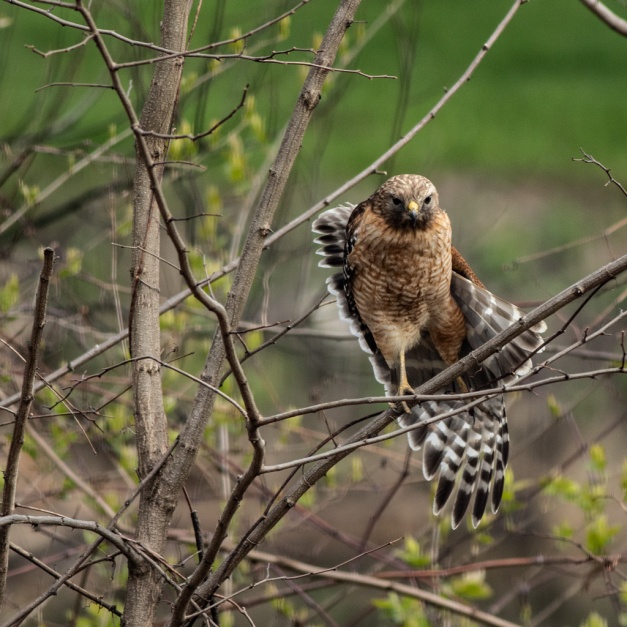 Deadly though it may be, this bird is beautiful and interesting to watch. It stayed for a long time on the tree branch, looking around, probably hunting from its perch. I’ve shot some photos of the hawk as it perched in other spots but never got shots of it in flight — they’re just so fast! Patiently waiting helps but this time I had a good vantage point with some space and, therefore, time to react when the bird launched. Murder Bird stretched its tail, stretched each wing, scratched itself, and faced the wind.

Off it went! I was able to shoot only a few frames and most were not very clear as I pushed to catch up with the hawk’s fast-accelerating movement; one shot, the one above, was decent enough to show. Our Murder Bird is a vicious predator but absolutely gorgeous and thrilling to watch.

The ones that got away

There was some excitement this dreary afternoon as this Cooper’s Hawk (Accipiter cooperii) first perched on a small tree in our front yard to stake out our bird feeder; then chased a couple of sparrows into a nearby row of barberries (seen here). This time the little birds escaped, rocketing out in separate directions at ground level from beneath the thicket and the predator. A pile of gray feathers beneath the bird feeder a couple of weeks ago were evidence that a Mourning Dove wasn’t so lucky as today’s sparrows. (Image shot though window glass and screen.) 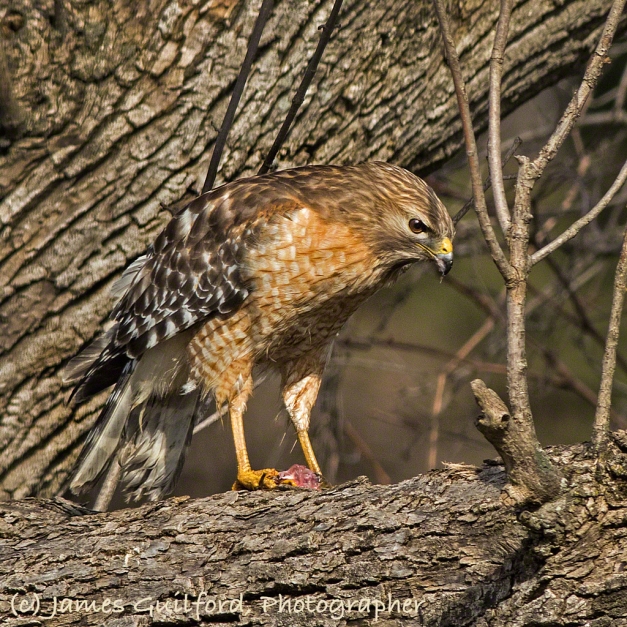 Not long ago, She Who Must Be Obeyed called me to the window. “There’s a hawk up there,” she said, “and he’s eating something!” I took a look and, sure enough, perched on a low branch was a big bird pulling at something it had caught. I grabbed my camera, put on the big lens, and returned to the window. There, in graphic detail, I could see a Red-Shouldered Hawk (Buteo lineatus) pulling, dismembering, and eating a bullfrog it had captured by our pond! I shot a number of photos: the hawk standing, the hawk with bits of meat in its sharp beak, the hawk pulling at guts. I normally don’t publish such graphic photos here because, well, it somehow doesn’t seem right. I know, hawks are birds of prey, beautiful, though natural-born killers, and what they do is how they live. I may add a photo later showing a bit more of the action though, over the past week, I’ve reconsidered several times. For now, I’ll post the photo shown above — the beautiful hunter with just a bit of the carnage — and leave the rest to your imagination.

See and Be Seen 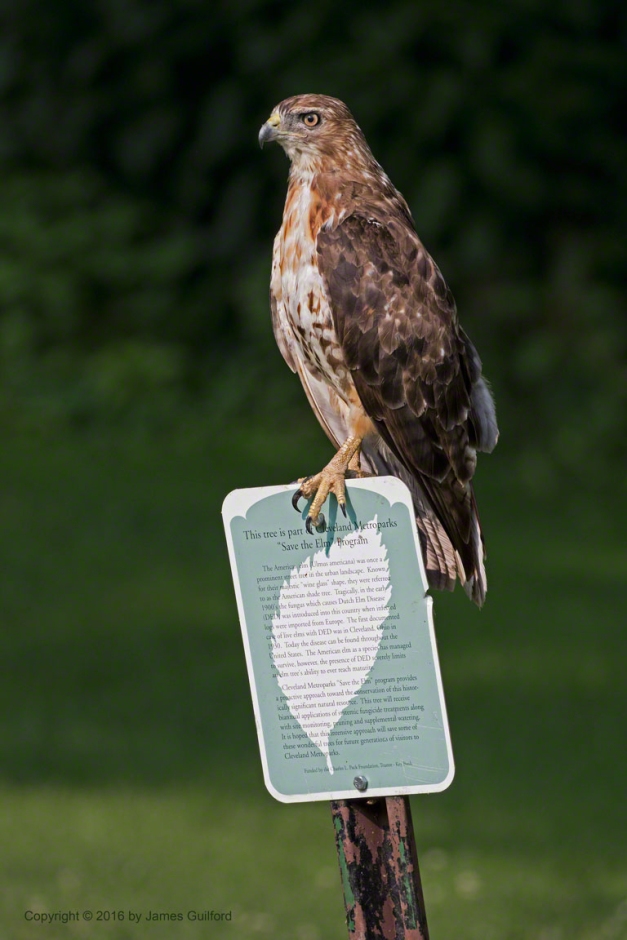 Walking in the Hinckley Reservation of Cleveland Metroparks today, the first day of summer, I spotted a group of visitors looking at something along the path ahead. As I drew closer I discovered they were watching and photographing a hawk! The bird was perched upon a signpost and did not appear to be bothered by the attention of nearby humans. Carrying my DSLR fitted with a 400mm telephoto lens, I was able to capture especially close-up images of the beautiful raptor at it watched for people and potential prey.

At one point a cicada flew within a couple of feet of the hawk and the bird turned to watch. Fortunately for the insect, it was just a bit out of reach for the hawk and, for its part, the bird seemed to think pursuit wasn’t worth the bother.

Turning to watch a cicada as it buzzes by.

I left after several minutes of photography, moving around and a bit closer to my subject. Not wishing to spook it into flight, I left the hawk still on its perch from which it could see and be seen.

Ready for my close-up!

One must look one’s best when posing for photographs!

It was too beautiful a day to stay indoors and do the things I ought to be doing, my thinking being I ought really to be outdoors! So off to Hinckley Lake I went for a vigorous hike with full camera backpack — the extra gear adds to the workout. As I was arriving so, too, was a hawk. A young Red Tail? I eyed the bird, within easy walking distance, as I assembled my trusty camera and telephoto. Warily I approached, shooting a photo now and again since each might be the last before the raptor takes flight. The bird stayed put, looking at me now and again, but mostly scanning the ground and sky. Closer and closer I approached in slow steps. The hawk stayed put. I found I could move around under the dead tree perch, even walking directly under my target. How very nice of the hawk to be my wildlife model of the day! Speaking with a Metroparks groundskeeper who was running a mower I learned he had been watching the same bird. It seems this hawk has learned that after the mower cuts the grass, small rodents may appear and are easy to spot in the now-open area! The bird had made a mouse kill just moments before I spoke with the man. The same bird has been spotted following the mower in another park area. A smart bird, and ready for his close-up!

Ready for my close-up!

I had vegetarian chili for lunch

Visiting my mother at her home over Christmas holiday, someone began remarking about the many birds that were visiting her feeder… including one large pigeon. The more they described the bird, the more I had to see it. From the window I saw a very sizable bird that was not a pigeon at all but a Cooper’s Hawk! The visit wasn’t for a meal of seeds but likely for a snack of sparrow. The hawk, perched on a tree limb, hadn’t caught anything; it soon hopped down to the ground just below our window, then took flight, disappearing amongst the trees.

Today I received a phone call at the office and, pacing while talking, I gazed blankly out the window then snapped into focus. To my surprise a hawk was perched upon a brick wall but 10 feet away! At first I thought it was another Cooper’s Hawk but began to think that this one may have been a Sharp-shinned Hawk; they can be tricky to tell apart and I’ve only begun to recognize them. Today’s bird, however, was eating. Holding some unfortunate, tiny kill to the wall with its talons, the hawk stripped bits of flesh off and gobbled them down.

I find the raptors to be among the most beautiful birds both in their appearance and their flight. They also happen to be among the fiercest predators around. It’s hard for me sometimes to reconcile the two aspects: beauty and slaughter. It is, however, their nature and they must eat to survive.

Unfortunately, though my camera was in the room, I was on the phone. By the time the call had ended and I looked out the window again, the hawk had finished its meal and taken flight.

I had vegetarian chili for lunch.