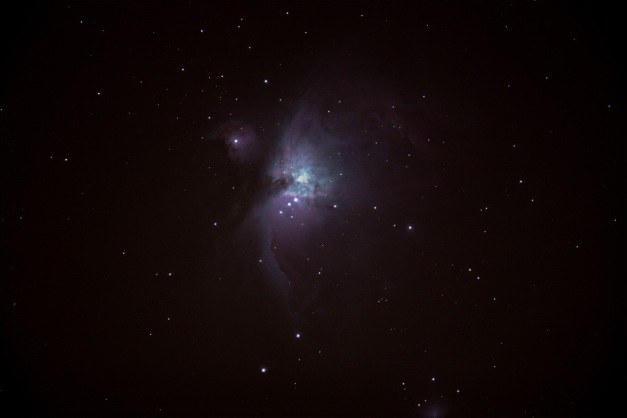 The Orion Nebula — Messier 42 — in the Sword of Orion lies about 1,344 light years distant from Earth. Photo by James Guilford

Mars during its opposition, or close approach to Earth, October 16, 2020. A tiny bright dot at the bottom is the planet’s polar ice cap.

I made some efforts at photographing Mars during its 2020 opposition — close approach — and managed “okay” pictures. That is to say, the resulting images were the best I’ve ever done but still short of what I’d like. I’m still working on technique and technologies and this may be the best I could manage given the relatively short 1,800mm focal length of my scope!

Star cluster Messier 2 — Messier 2 or M2 is a globular cluster in the constellation Aquarius. It was discovered by Jean-Dominique Maraldi in 1746, and is one of the largest known globular clusters. It contains about 150,000 stars and lies 55,000 light-years distant.

Around the same time I turned the telescope to try imaging bright star cluster Messier 2. There was a slight but noticeable improvement there over what I’d managed before.

In early November I set up the scope at night, using the polar alignment system, so that I would be ready for solar photography the next day. Of course I observed other objects that night but then I noticed Orion rising through the bare trees. I stayed up much later than I’d planned but when Orion’s Sword came into the clear I captured what turned out to be the very best images that I have ever made of the Orion Nebula! The brilliant Trapezium star cluster at the heart of the nebula got overexposed but I was thrilled how much of the area’s nebular cloud showed.

Full-disk image of our Sun with sunspot group AR3781 showing clearly. Sun is entering a more active phase of its cycle, for months there were few, if any, sunspots to observe. 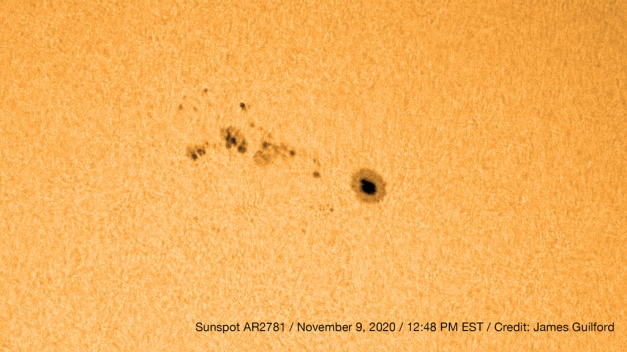 I’m also very pleased with my efforts to image the Sun where a huge sunspot group (Active Region 2781) had appeared. The results were very good, using my telescope with Canon EOS 6D Mark 2 camera body attached for full-disk images. To protect camera (and eyesight) I used an AstroZap brand full-aperture white light film filter. Then I switched over to the little ASI178MC planetary camera; its smaller sensor providing a much-magnified effect. While not the best I’ve seen, I’m pretty pleased with this batch of solar images.

Telescope set up for solar imaging. The Canon EOS 6D Mk. 2 camera is in silhouette at the base of the scope while the little red ASI planetary camera rides above it. The blue box shades a laptop computer for use with the ASI.

So, even under our light-polluted skies, I’m able to manage some decent astrophotography. I’m sure that with time, practice, and clear winter skies I’ll get many more amazing views.

Saturn in the Eyepiece

Unexpected business led me to visit the observatory Tuesday night. Since I was there and the sky was nicely clear, I decided to open the dome and do a little observing.

Orion is low in the west these nights and the great nebula (M42) was actually only visible through the bare limbs of the neighbor's trees. The view was splendid, however, and at low magnification the cloudy expanse took on a fan shape. The stars of the Trapezium were clearly displayed, nestled in the gauze.

Using star Sirius to set R.A. and my notebook computer's The Sky software to find the coordinates, I was able to use the telescope's ancient dials to locate the "twin" star clusters M46 and M47 — not visible to the unaided eye this night. Declination settings are not visible on the old scope so I had to do some fishing. Still, it was gratifying to be able to get in the right neighborhood using the telescope's century-old devices. The clusters were more attractive through binoculars –a fuzzy path glowing path across the view– than through the telescope though, at low magnification, M46 filled the eyepiece with diamond-dust stars.

Turning the telescope further east as the Moon was rising, I located Saturn. The ring system is still close to edge-on and opposition took place only a few days earlier (March 22). Through the fist-sized, low-magnification eyepiece the planet was crisp and bright. Faintly visible in the field of view were tiny glowing dots — some of the Ring World's family of moons. It was a lovely sight. I had my camera with me so tried a few afocal (hand-held, lens-to-eyepiece) shots. I got a fairly good image (seen here, cropped to imitate an eyepiece view) that depicts the ring plane's angle and even hints at the rings' shadow on the planetary body. Of course, the moons don't show at all being much too dim compared with Saturn.

I closed up at about 10 PM with the Full Worm Moon rising and drowning out the light-songs of everything nearby. It was a good night of unexpected astronomy.