I just learned WordPress released an updated version of their Apple iOS iPod and iPad app. Customers write the update corrects several serious and frustrating issues that plagued earlier releases. So I’ve reinstalled the app and we’ll see how it goes. Third time’s the charm? 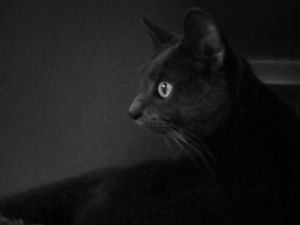 Just for fun I tried a cell phone photo of Tasha this morning by the dim light of a nearby window; the rest of the room was dark. I didn't expect much but, when I finally looked at the picture, it reminded me of some of the very early efforts in the history of photography.. a Daguerreotype, glass plates, or something. I stripped out the color and darkened the image a bit. I kind of like it. I've also been intrigued lately by the growing interest amongst cell phone and other digital camera users in making their images funky-old looking. Hipstamatic is but one example of nostalgic image software, giving iPhone images a '50s – '60s retro look. Fun, but is it old-fashioned? 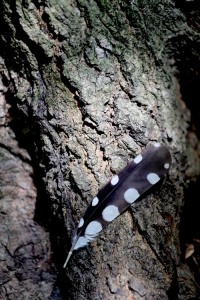 It was a mostly-cloudy and cool day, only about 70F degrees. After a quiet Sunday morning at home, we decided to explore a park we'd not visited before — Plum Creek Park in the Medina County Park District. The park is located at the edge of the sprawling suburban city of Brunswick and immediately adjacent to residential areas. Exploring the earthen paths through the park's woodlands, however, you'd never know you were so close to "civilization." The woods were lovely, dark, and deep, as the poet wrote. We didn't see much in the way of woodland fauna. We did see deeply green mosses, interesting fungi, tree bark of various textures, and enjoyed an invigorating stroll over the rolling woodland floor. She carried her newish Panasonic Lumix point-and-shoot camera and I my new Canon EOS 50D SLR for its first outing in the real world.

With the canopy of trees overhead and thick clouds above that, it was dark along the path. I shot a good number of photos and had some good results. Many shots, however, just didn't make it. Between the difficult conditions and learning the new camera, quite a few shots were exposed poorly or were not in good focus. There's much yet to learn, but I know it's me and not the camera! Except….

That darned 17-40mm wide-angle zoom lens continues to disappoint. I won't give up on it til I can try it stopped down to a decent aperture but I'm unimpressed –disappointed, really– with what I'm seeing. I had hoped the new camera body might provide better results than the little Digital Rebel XT did with this glass. Nope. {sigh}

UPDATE: It is beginning to appear the "software" problems I was having were not so much the fault of Photoshop CS4 as they were Photoshop's issues with my video/chipset drivers. I was able to open and edit a couple of photos after updating the drivers (Dell-modified Intel drivers). It's not all cleared up as PS crashed whilst I was saving an edited image. At least it appears we're headed in the right direction. Then there's learning to work effectively with RAW files….