After a long period of quiet during our Sun’s fairly predictable 11-year activity cycle, things have been happening. What was a bright, clear disk has become speckled with sunspots of late. The increased activity brings with it the chance of Earth-directed coronal mass ejections, or CMEs, which result in solar storms when they collide with our home planet’s magnetic field. Auroras, or “northern lights” for us, are one potential result of solar storms. The less pleasant effects can include disruption of radio communications and satellite operation, all the way to electrical grid failures at the extreme!

Several recent CMEs have missed Earth but one is headed in our direction as this blog entry is being written. According to SpaceWeather.com, “{A} CME is on the way following an explosion in the magnetic canopy of sunspot AR2864 on Sept. 8th. NOAA analysts believe Earth could experience a glancing blow or near miss late on Sept. 11th.” Those favored with clear skies and a good view to the north may want to be on the lookout for aurora, but the odds aren’t favorable … this time!

Here are two photos of Sun I shot at 3:43 PM EDT (7:43 PM UTC). The first image shows the full solar disk. Notice not only the dark sunspots but also the lighter-colored “splotches” of additional active solar regions, most visible near the edges of the disk.

The second image is cropped to show the major concentration of the day’s sunspots with their official numerical designations. Both images have been color tinted.

The Sun is waking up and putting on a wonderful show! 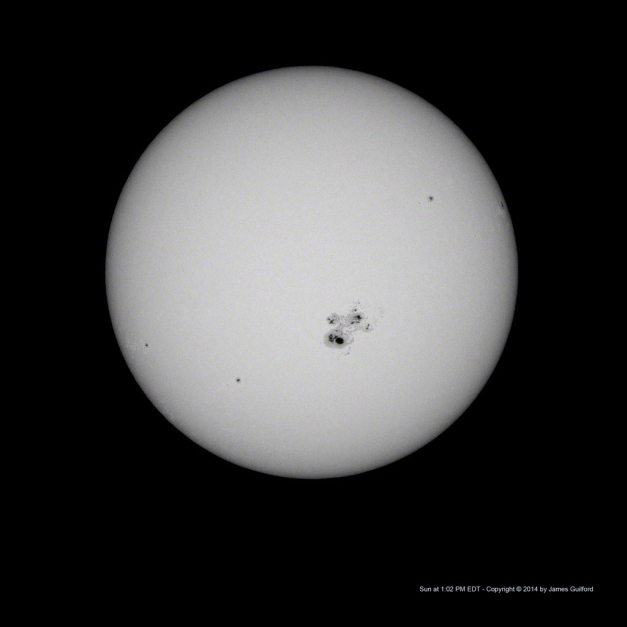 Due to the positions of Sun, Moon, and Earth, lunar and solar eclipses tend to be paired up. So it was that while we had a total lunar eclipse about two weeks ago, we enjoyed a partial solar eclipse this evening. As partial eclipses go, this one promised to be a good one. From our vantage point in Northeastern Ohio, we were to expect about 50 percent coverage of Sun’s bright face by Moon, a late-day event ending with sunset. After much deliberation, owing to the very low elevation of the eclipse over the western horizon, I decided upon a fishing pier on the south shore of Lake Erie. If we were lucky we would see a beautiful, crescent Sun sinking colorfully into the distance, reflecting off of the lake waters. That was the image in my mind, anyway.

The pier became packed with eclipse watchers and I was happy I’d arrived early and staked out a corner! Yesterday was cloudy and I could not shoot a test image of Sun without Moon but did get the opportunity today. The image was very good and one of the best I’ve managed of the Sun. The solar disk was particularly striking because a massive sunspot cluster was visible … really massive, spanning nearly the distance from Earth to Moon (~ 250,000 miles) across the Sun! Very photogenic.

As I mentioned, the eclipse was taking place late in the day, beginning at 5:42 PM EDT local time and in progress at sunset, about 6:35 PM — low to the horizon and in the messiest part of Earth’s atmosphere. The evening’s photos showed the lunar limb nipping off bit after bit of the Sun until the bright disk looked like a cookie with a large bite missing; a raisin cookie, I think, due to the sunspots! 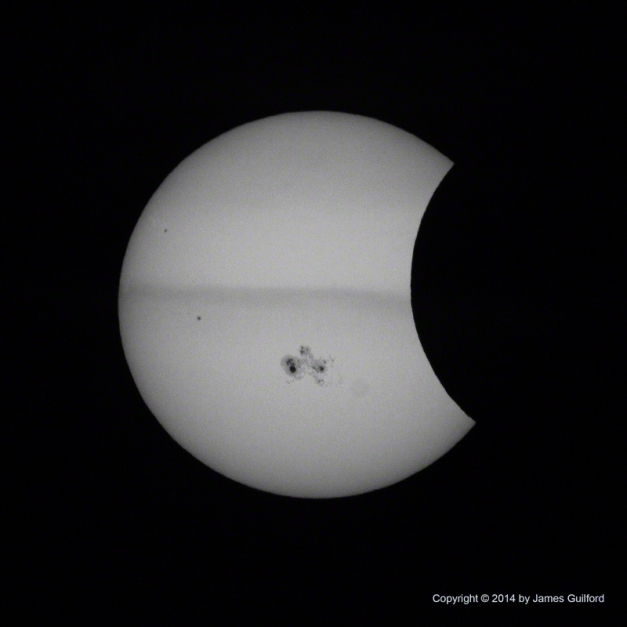 It wasn’t long, however, before we began to see streaks of cloud crossing that bright, chipped disk and before we knew it, the eclipse sank into distant clouds. There was no colorful sinking, no beautiful reflections, only a dark lake and fading cloud-obscured sunset. 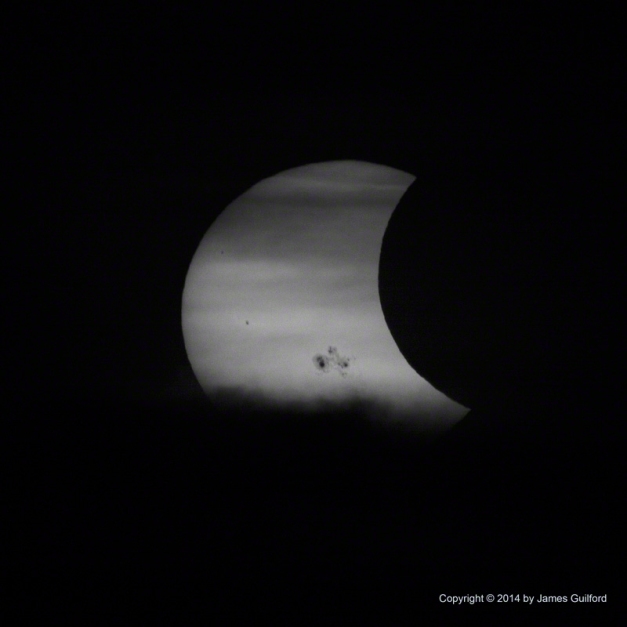 Even with the sad ending, the crowd was excited and pleased to see what had transpired. Someone asked if they could review my images using the tiny LCD panel in the back of my camera. I was happy to oblige and soon drew a small crowd of departing spectators who thought the pictures looked great! (Some folks had arrived too late to see any of the eclipse.)

Later, processing the pictures on my computer, I could see that the eclipse images were nowhere near as good as I had hoped and didn’t compare well with the earlier tests. Why? Remember how I mentioned the low-t0-horizon position of the eclipse? The murk? The thick, wind-churned atmosphere robbed my images of their expected clarity. Am I disappointed? Yes, a little. Still, it was a fine little eclipse and I was delighted to have seen it! 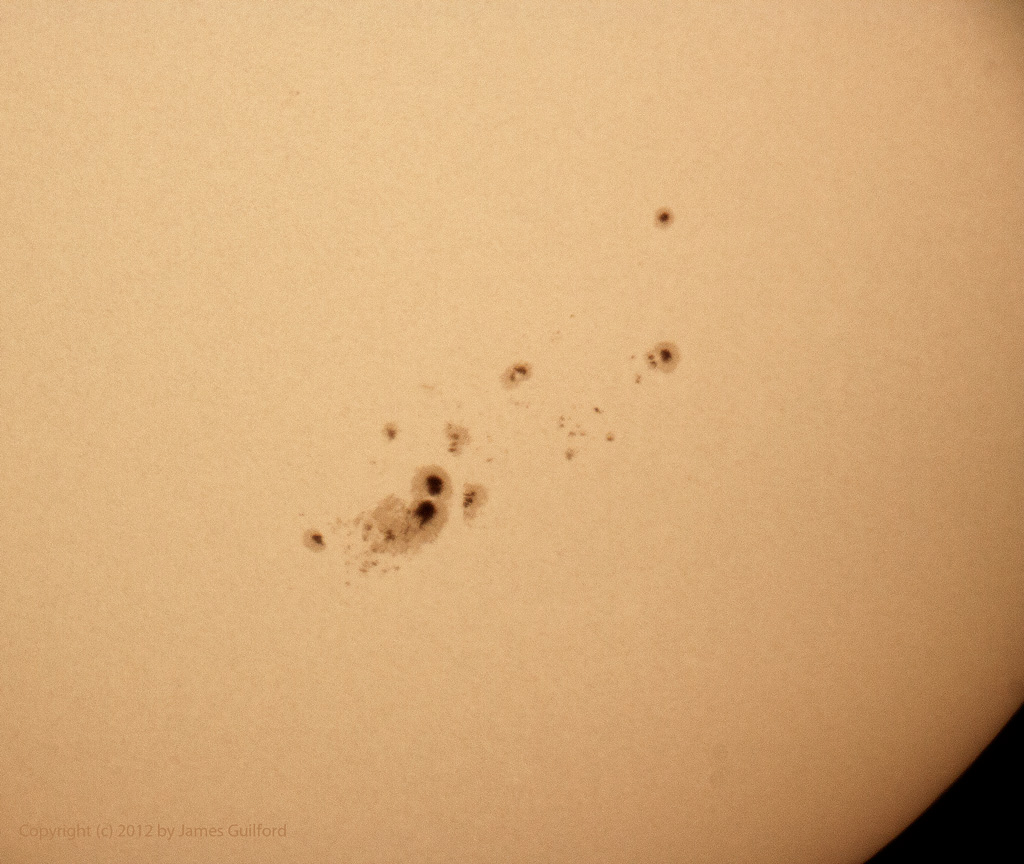 Hosting a group of kids from a local church camp this morning, we were treated to the best views of sunspots I’ve ever had. Sunspot group AR1520 is absolutely enormous, dominating the face of the Sun and observing conditions were very good. We viewed the Sun at about 30X and, later, at about 120X through Stephens Memorial Observatory’s 112-year-old refractor fitted with a white light solar filter. After the campers left I hauled out my camera and discovered I had the wrong direct-focus adapter with me and could not focus at all! So I removed a piece, focused as best I could, and hand-held the camera for a direct-focus image. The resulting image (above) is soft, not doing justice to the telescope or the sunspots, but the view is impressive, nonetheless; it’s a representation of what we saw which was truly amazing! 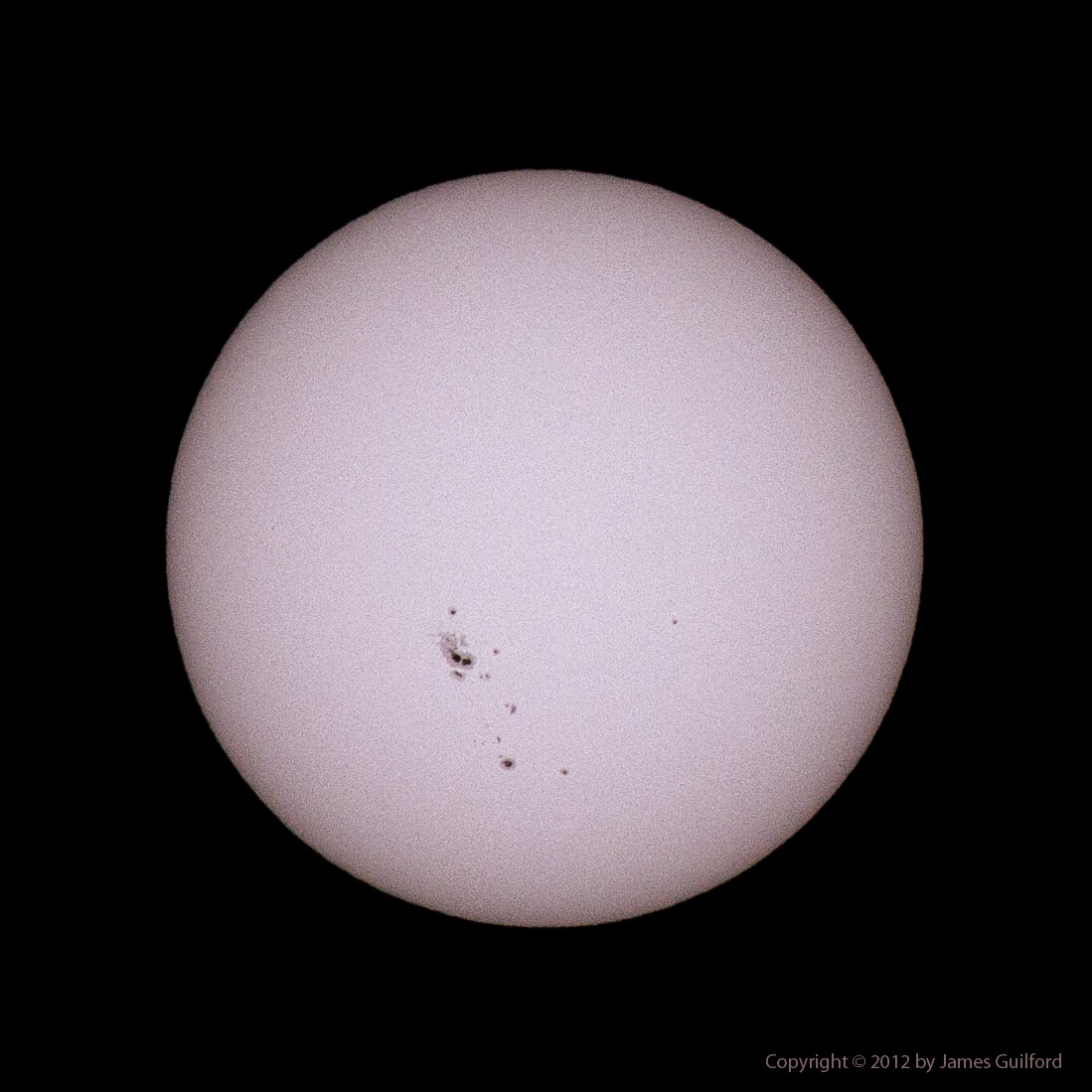 Even the Sun gets blemishes on its face 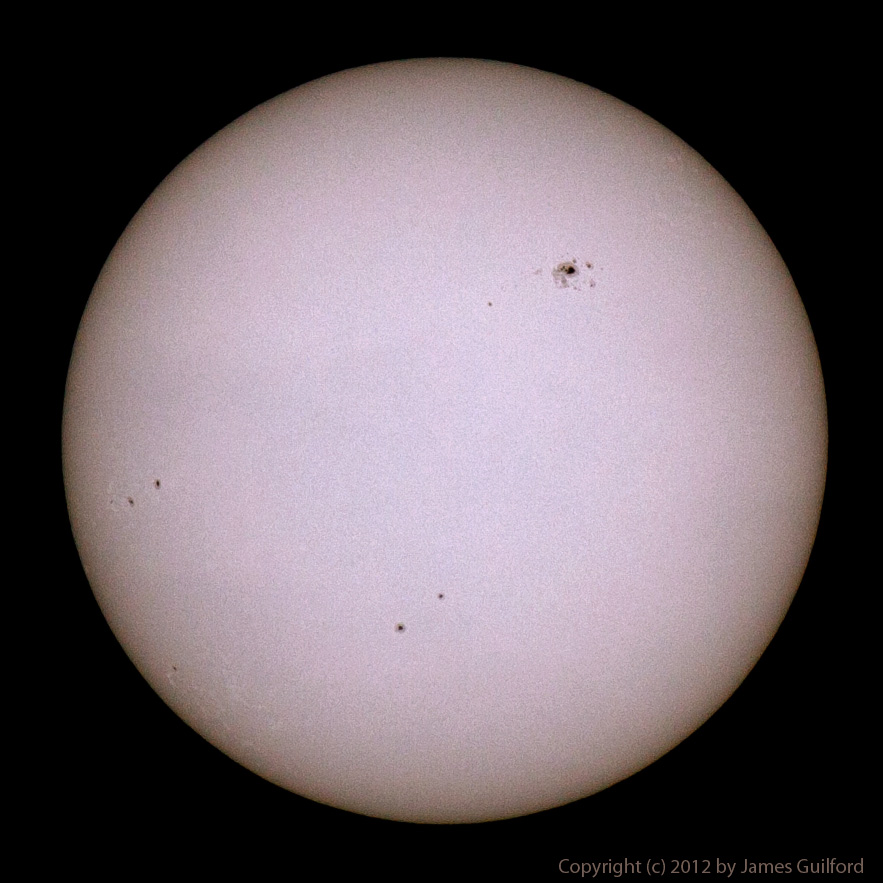 Sunspots, including the group AR1476, blemish the face of the Sun.

Sunday, May 13 dawned reasonably clear and so, with cloudy skies anticipated, a few rushed photographic observations were made of our Sun. I had to fit that in before visiting Mom for Mother’s Day! Active Region1476 (a huge sunspot group) continued to dominate the solar disk though it had been joined by several smaller but notable sunspots blemishing old Sol’s face. Also visible in this photo are granulation and other disturbances — the chromospheric network — in the solar atmosphere. Notes on the photo, the best image I’ve done of the Sun so far: Canon EOS 50D, ISO 400, f/8, 1/1,250 sec., 400mm Canon telephoto, AstroZap white light film solar filter, May 13, 2012 at 9:15 AM. The sky was reasonably clear though this image was captured through a thin cloud, the remains of an aircraft’s vapor trail.