Fixed the Toshiba display, at last!

UPDATE 11/15/2013: After about a week of blank screen-delayed logons, the Toshiba is now working right. I’m not sure precisely what has happened — whether it was a change in the system’s Power Plan, or recent Windows Updates from Microsoft — but I do see a couple of changes. First, when I open the laptop’s lid after shutdown, the computer does not immediately start; I must press the power button to start it. As I said, this is following a complete shutdown, not sleep or hibernation. Second, once the power button is pressed the machine starts up, runs its POST, and boots windows all in less than one minute flat! No more booting to a blank screen and waiting 20 to 45 minutes for the computer to awaken from its darkness. Between Windows 8/8.1’s inherent boot speed and (especially) the solid-state drive (SSD) I installed, it’s nice to have the laptop working to something far better than its factory-installed Windows Vista experience! I don’t know what finally resolved the blank screen issue but I’m glad things are better now.

UPDATE 11/5/2013: The notebook booted up this morning with blank display! Toshiba’s splash screen came up, followed by the Windows 8 “Window”, then nothing but a mouse pointer when the mouse is moved! Something’s afoot and I’m checking into it. Frustratingly, Windows 8/8.1 apparently cannot be started in Safe Mode with a key combination (like F8 or Shift) unless Windows starts and presents its GUI — not much help if it’s the video driver that may be at issue!

A little later… I let the computer sit for a long time while I did other things, the screen still black with only the mouse pointer showing. I got something out of a desk drawer, closed the drawer a little hard (accident, not frustration) and {poof} back came the pretty Windows 8.1 lock screen (shown above)! Just … plain … weird! I did learn something not very comforting about Windows 8 and Safe Mode, however, so I guess it’s all good; that is, after all, why I installed Win8 on this old Toshiba.

Wednesday … The screen was black again today when starting the computer. I had a thought, however, and with the computer shut down, I unplugged the AC adapter and pressed the notebook’s On/Off switch. The computer started right up and presented the normal Windows startup screen. I logged on without incident, plugged the AC back in, and am using the machine right now! Very odd, indeed.

Ever since I upgraded my good old Toshiba Satellite A215 to Windows 8, one thing has really bothered me (besides Windows 8) … the notebook’s display was downgraded. The video had lost resolution of detail, was “stretched” so that on-screen images were slightly flattened, and there were no better screen settings to select. Windows had identified the monitor as Generic PnP and installed its “Basic” video driver. So today, as part of my learning Windows 8 (now 8.1) technical operations, I made fixing the display my goal. I did a lot of Googling and a few abortive attempts at new driver installation. Finally, I came across this article on WindowsForum.com (thank you “Medico”), followed the link as indicated, and downloaded the driver. Hallelujah! The moment installation completed, the video was as good as I remembered, which was very good, indeed! I actually like looking at the Toshiba’s display again as I explore the new Windows. By the way, my old Satellite’s display is not touch-sensitive so I’m getting the painful Windows 8 desktop user experience. — 11/4/2013

I didn’t have to wait for Microsoft 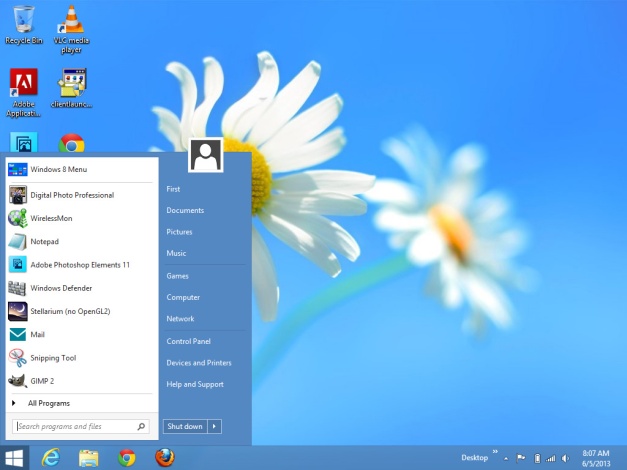 What’s this? Windows 8 with a Start Menu?!

As a very experienced user of Microsoft’s Windows operating system (OS), and a tech guy, I felt it important to give Windows 8 a try. I installed Windows 8 on a middle-aged Toshiba Satellite laptop computer that had previously run Windows Vista, and Windows 7. The laptop does not have a touch screen.

My main issue(s) with Windows 8 as delivered center around the lack of a Windows-style Start Menu. The Start Menu is the launch pad for virtually everything one would want to do on a computer outside of running applications from desktop shortcuts. In previous versions of Windows users could click on the Start Menu, then select applications or explore sub-menus to complete an action. Say you want to change certain settings in the System or Security, or check and modify a Hardware setting: go to the Start Menu, click Control Panel, and select what you want to work on.

With Windows 8 the user needs to Search for just about anything they want to do beyond the basics. If you don’t happen know the name of the action you need to complete, well, you have to start guessing. If you don’t know a feature or setting is even available, well, I guess you’ll never use it; you don’t know to even search for it. Reminds me of Microsoft’s own TV ads for their Bing vs. Google search on the theme of deciding vs. searching. Thing is, you really can’t decide if you don’t know the choices, and you can’t really search if you don’t know what you’re looking for! I guess that is simple but not very useful.

So I wanted my Start Menu back. 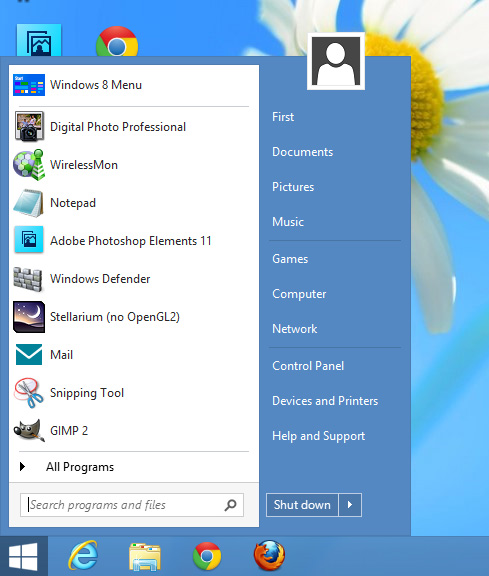 The Stardock Start8 Start Menu on my Windows 8 computer.

Stardock is a software company that’s been around since 1991 and makes nifty applications that help users get more out of their computers. They created Start8 and yes, its purpose is to give Windows 8 users the Start Menu they need if they are running a computer and not a tablet.

For a mere $4.99 I now have a Start Menu replete with my less-used applications on a list, direct access to the Windows Control Panel, easy access to system utilities, in short, it makes Windows 8 into a good desktop OS for anyone above the level of Beginner!

And I didn’t have to wait for Microsoft to issue Windows 8.1 — due later this year — to bring back the Start Menu.

Still ticking is the Toshiba Satellite A215 I bought new in September 2010, its life extended now using a Samsung 830 solid-state drive (SSD) and Windows 8.

Now, there was nothing wrong with the original mechanical hard drive except for the typical long boot time. And there was nothing wrong with Windows 7, except that I didn’t have installation disks (darned “instant upgrade”). The combination of things, however, called out for a change of course: I would install the SSD “bare” and make a fresh operating system (OS) install. Since I’d have to pay for Windows 7 — again — I decided to reinstall the computer’s original Vista Home Premium and install Windows 8 for the low, low introductory upgrade price of $39.99.

It took all day. First the lousy Toshiba restore process included all of the original bloatware — stuff I didn’t want originally and certainly not now! That took more than an hour. The good part of that restore is that it restored use of the Toshiba’s built-in LAN port, apparently broken by some previous driver update.

My “immediate gratification” download of Windows 8 took, oh, probably about six hours! Fortunately I could walk away and let the file dribble down, stopping by once in a while to look at the estimated time remaining and heave a sigh.

Once downloaded, Windows 8 installed quickly and without error. I installed the few Windows updates waiting, and was good to go!

The SSD transformed the laptop’s user experience with power-on to logged on in less than a minute; I love the thing. The machine makes less heat now, its internal fan runs mostly at low speed, and I suspect battery life is proportionately improved but I haven’t tested that.

Windows 8 is truly made for tablets, no doubt about it. But I like the freshness of its design, even like the lock screen (shown above), and beneath it all I see Windows 7’s DNA; I feel very comfortable once back at the desktop, behind the tiled interface.

Best of all, for less than the price of a Kindle Fire, I have a speedy, fully-functional notebook computer with a full-size keyboard ready to work with me for some time to come: Vista > Windows 7 > Windows 8 – the third OS for my old laptop PC.

More power to it

After a little more than two and one-half years of service my lovely ﻿Toshiba Satellite notebook computer needs a new battery. The original, standard battery isn’t holding charge as it once did and only runs for a little better than an hour. Since the machine still works well, I invested in a new extended-capacity battery; I ordered it last night and it should arrive early next week. I’ve a speaking engagement next week and want to be sure the Toshiba has enough power to get through the entire presentation without needing to be plugged in. I’ll be speaking to an astronomy club about the state and future of Stephens Memorial Observatory. I’ll also get a look at another Ohio observatory I’ve not seen before. Yippie!

Beginning of a beautiful friendship

Just about the time I was beginning to seriously consider buying a notebook computer of my own, I received some gift money! Nice when it works out that way. She Who Must be Obeyed was cool with it and, rather than claim it as "family income" let me use it for shopping. She even wound up chipping in a bit more to help with the purchase! So, literally overnight, I went from casual shopping for cheap, even used, notebooks to buyer of a new modestly-priced modern wonder. I picked up a Toshiba Satellite A215-S5818 at a local big box electronics store. Actually we shopped one store after dinner out Friday but they were sold out. We wound up heading to another of the chain's stores much closer to our home where two computers were on hand. It came pre-loaded with Windows Vista Home Premium … not my first choice in OS but I figured I ought to use it as a learning opportunity because it's a M$ world and, before long, Vista is going to be the only choice. Anyway, the machine has loads of memory (2 GB), really good modern processor, and should suit my purposes just fine: telescope control and image capture, speaking engagements, and (rarely) on-the-road communication. And yeah, I really do need to learn Vista inside and out.

My out-of-the-box experiences with it might be as expected for an IT guy: look it over, remove all the crap software the manufacturer installed, establish network connectivity, run Microsoft Updates to get the OS patched, start installing my software. No fun stuff just yet, mostly utilities, but the fun* comes soon. My first impression is that the computer was an excellent buy and I'm pleased with what I'm seeing. It's fast and quiet, has a beautiful display, is light weight enough for me, and seems well built. Its Wi-Fi connectivity is fast. Vista will take getting used to for, as in previous OS introductions, the features are pretty much the same but accessing them has been changed… many things have been moved. First speaking engagement is Feb. 2 at a nearby nature center and is entitled, "The Great Mars Hoax." Title was someone else's idea but it's an interesting starting point and ought to be a lot of fun. I may name the machine "Louis," because what springs to mind is the final words from the classic film Casablanca when Rick and Louis are walking off into the foggy night at the airport. Rick says to police Captain Renault, "Louis, I think this is the beginning of a beautiful friendship."

* Fun for me isn't gaming. The fun stuff will be astronomy and image processing software. I think the last game I played on a computer was solitaire and I've no interest in any games I've seen or heard about. I've just never been that kind of guy!