It ain’t pretty but it’s progress

Okay, I know this is ugly — a not-very-good image of planet Jupiter. I know, and yet I’m posting this because this humble effort is the best I’ve done thus far in my beginning planetary imaging efforts. I made a stack of images around 11:11 p.m., Friday, Sept. 10. Conditions were difficult with breezes, and high altitude haze and I found achieving good focus was hard. Maybe an electric micro focus would help? A longer native focal length telescope would also help by producing a bigger image on the camera’s sensor!

On the “up” side, even this crude attempt shows several of the planet’s cloud belts, even hints at major atmospheric disruptions; that makes me happy, or at least happier. Lost in processing were nearby Galilean Moons Io and Europa which would have appeared just to the right of Jupiter’s disk. My previous planetary effort was Mars one year ago! Between the sky conditions (rarely good, it seems), and my nighttime motivation, I sadly don’t get much practice.

To produce the image I used my Vixen 8-inch Cassegrain 1,800mm FL telescope (love the scope but need more focal length), ZWI ASI178MC planetary camera, Lynkeos Stacker processing software which is a native MacOS application. I shut down a bit after midnight Friday night and hoped for clear skies Saturday night — I wanted to try again and try a a piggybacked shot using my DSLR and telephoto lens, getting Jupiter and his family of moons. Alas, no. Clouds and smoke from western U.S. fires plus continued breezes played havoc with the sky. So I tore down the rig and stowed everything hoping good conditions come soon.

After a long period of quiet during our Sun’s fairly predictable 11-year activity cycle, things have been happening. What was a bright, clear disk has become speckled with sunspots of late. The increased activity brings with it the chance of Earth-directed coronal mass ejections, or CMEs, which result in solar storms when they collide with our home planet’s magnetic field. Auroras, or “northern lights” for us, are one potential result of solar storms. The less pleasant effects can include disruption of radio communications and satellite operation, all the way to electrical grid failures at the extreme!

Several recent CMEs have missed Earth but one is headed in our direction as this blog entry is being written. According to SpaceWeather.com, “{A} CME is on the way following an explosion in the magnetic canopy of sunspot AR2864 on Sept. 8th. NOAA analysts believe Earth could experience a glancing blow or near miss late on Sept. 11th.” Those favored with clear skies and a good view to the north may want to be on the lookout for aurora, but the odds aren’t favorable … this time!

Here are two photos of Sun I shot at 3:43 PM EDT (7:43 PM UTC). The first image shows the full solar disk. Notice not only the dark sunspots but also the lighter-colored “splotches” of additional active solar regions, most visible near the edges of the disk.

The second image is cropped to show the major concentration of the day’s sunspots with their official numerical designations. Both images have been color tinted.

The Sun is waking up and putting on a wonderful show!

NGC869 — Half of the Perseus Double Cluster.

I suppose one cannot return to something one hasn’t left. Still, with weather settling down and sunset coming earlier I’ve been looking to further explore the night sky.

We live in a small city with big light pollution. The light dome over our area has grown steadily over the past decade and from our backyard most northern stars lower than Polaris are completely obliterated by artificial light. To the south, the view is probably similar to “suburban” light pollution levels. Which is to say, bad but not impossible.

Lately I’ve been using my new telescope in imaging experiments. This week, unlike earlier recent efforts, I was able to get the telescope mount aligned well which allowed its computer to find dim objects in our bright sky. I was able to visually observe Jupiter (with Great Red Spot front and center), Saturn, the M15 star cluster, the Perseus Double Cluster, the Ring Nebula in Lyra, and the Andromeda Galaxy.

Attaching one of my DSLRs to the new Cassegrain reflector, I shot images of several of the larger deep sky objects. Vibration and tracking were issues, as was achieving camera focus. Working around those challenges as best I could, I made multiple images of the Ring Nebula (M57) and one of the clusters in the Perseus Double (NGC869).

Looking at the camera’s built-in LCD panel that night, I was astonished… I could see color in the Ring Nebula! Visual observers, using smallish telescopes, usually see no color in the Ring; film and electronic sensors readily collect enough photons to register color. Still, a very happy surprise to me! So I shot a series of prime focus images of the nebula. The Perseus Double was also visually attractive so I shot that as well. About 10 seconds for each of those. Efforts at shooting M15 failed: the telescope didn’t track well enough to produce round stars in the exposure time set — possibly too long an exposure. 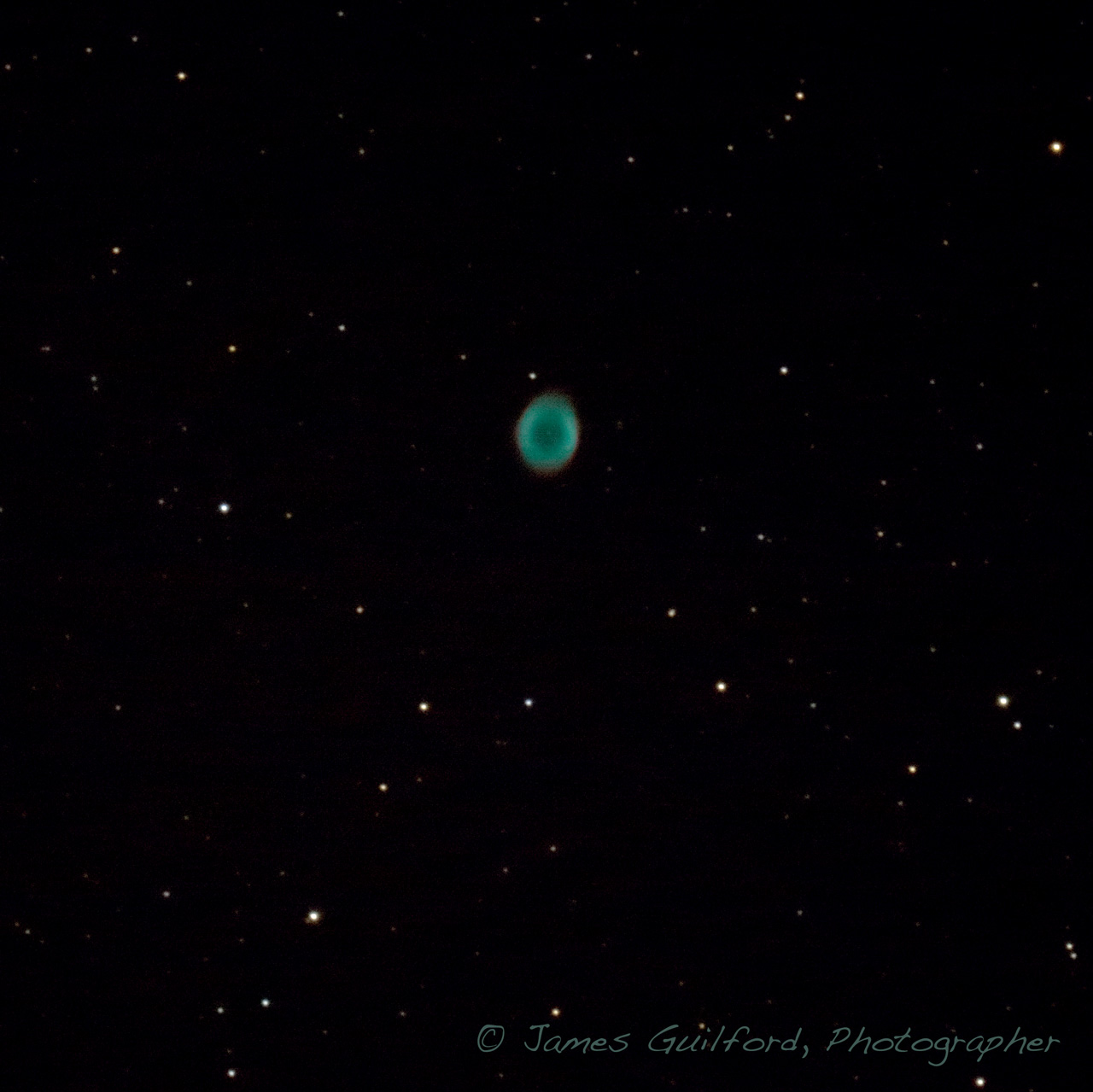 Astrophotography of deep space objects can be extremely technical. The learning curve on an excellent product like PixInsight is more like a cliff than a curve. I searched and found a software that is excellent for me at my relative beginner level — Starry Sky Stacker (SSS). The SSS has the important basics for good astrophotography, and has an easy-to-learn image processing process with little frustration. So, to get started producing and learning, I used SSS to align, stack, and integrate the images for both NGC869 and M57 with results pleasing to me.

Over the coming weeks and longer, I’ll be assembling more equipment and skills and with luck, by spring, will be producing decent space pictures beyond the Sun and Moon.